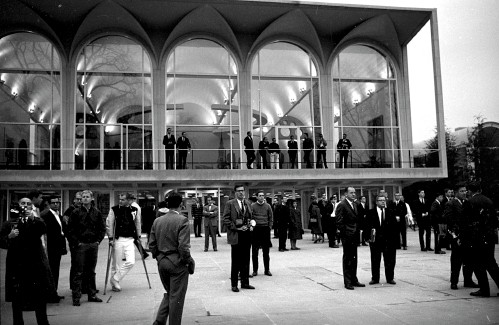 HANOVER — In his indispensable guide to the architecture of Dartmouth College, Scott Meacham wrote one of the longest entries in the book about the Hopkins Center for the Arts.

Dartmouth students, faculty, and leaders recognized the need for some kind of student center in the late 1920s, Meacham wrote. The college’s own artistic productions, including an annual interfraternity play competition, had overtaken Webster Hall – then a clumsy opera house, now the home of the Rauner Library – and Robinson Hall’s Little Theater.

Prominent architect Jens Larson twice drew up plans for a huge arts center in the style of existing campus buildings, but both plans were postponed, first by World War II and then by the Civil War. Korea.

In 1955, the two main movers of the project got to work: Nelson Rockefeller, a 1930 Dartmouth graduate and future governor of New York, and architect Wallace Harrison, Rockefeller’s cousin by marriage and a leading modernist.

Dartmouth last month unveiled plans for an $88 million renovation and expansion of the Hopkins Center that has taken years to prepare.

The original building, which opened in 1962, was capital for the college, Hanover and the Upper Valley.

The construction of the Hopkins Center cost $7.5 million. That’s about $71.4 million in today’s dollars.

Harrison’s plan for a comprehensive arts center closed off the south end of College Street and redid the block between the green and Lebanon Street. As Meacham describes it, the Hopkins Center became a hub that brought together the college, the community, the arts, and the general public.

“Functionally,” Meacham wrote in The Campus Guide: Dartmouth College“the Hop is often compared to a customs checkpoint: if the college is one country and the city another, then the Hop is the border crossing, and it manages to form a transition that the architect William Rawn described of “one of the most seamless” connections between the city and the campus of any college.

This description fits how Nora Jacobson experienced the Hopkins Center. She was 8 when her family moved to France, before the Hop was built, and 15 when they returned to Norwich in 1968. The Hop’s openness made it a magnet for pupils from the high school in Hanover.

“It was like a second home for us,” Jacobson said.

The Top of the Hop, the large lounge with tall windows overlooking the green, felt like an oversized lounge, and the snack bar served “those big thick shakes,” she said.

Returning from Paris, Jacobson watched French New Wave films at the Spaulding Auditorium, “sitting in this huge expanse of darkness.”

The Hopkins Center differed in many ways from other buildings in Dartmouth and the way they were used that are difficult to account for or describe.

“If you want to know what I think about it, look around you,” said Harrison, who would go on to design the Metropolitan Opera in New York, during the opening ceremony on Nov. 8, 1962.

“A building is either a clean building or a mess, and this one will never have marks on it,” he added.

Rockefeller called the Hop “a sign of America’s awakening to the importance of the arts”.

It also heralded a change in the way audiences encountered the arts.

Prior to the Hop, residents of the Upper Valley would have experienced the performing arts at their local town hall or barn or at the opera houses of Lebanon, Claremont and White River Junction. And the performers would have been their families and neighbors.

“We were all pretty dependent on the community,” said Helen Taylor Davidson.

His parents met during the Depression when his mother came to Meriden to work with the village Howard Hart Players and his father, an English teacher and theater director at Windsor High School, picked up his future wife at Windsor station.

Davidson took singing lessons in Hanover in the late 60s and there were regular lunchtime gigs at the Hop.

Community-oriented performances, especially theater, continued after the Hop opened, Davidson said. She performed in a musical at the Congregational Church of Hanover on College Street, but she also sang in a performance of Mozart’s first act Don Giovanni at the Hopkins Center.

The Hop always mixes college and community performances with touring productions from global artists. Some of these visitors got their start at Hop, notably the Pilobolus dance ensemble, founded in Dartmouth in the early 1970s.

Part of the rationale for the proposed expansion is to provide more space for students to develop their own work before heading out into the wider world. Presumably, they’ll return to the crossroads on campus that gave them room to run.