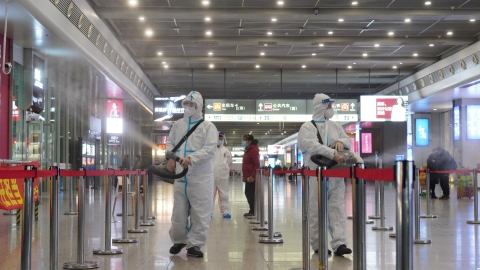 Shanghai’s rail and transport networks are prepared for the return of travelers who celebrated the Spring Festival with their families in their home provinces.

More than 360,000 people are expected to arrive at Shanghai stations on Saturday, the 20th day of this Spring Festival peak, the China Railway Shanghai Group said. One hundred and twenty-two pairs of two-way passenger trains were added to cope with the crowds.

Passengers from Fuyang, Hefei, Anqing, Xuzhou in Anhui and Jiangsu provinces and other places have increased significantly, according to the group.

The city’s subway and bus system began running additional trains and buses to cope with the rush to return.

From Saturday, the Shanghai Metro will ship more trains on lines 1, 2, 3 and 4.

In addition, 24 special bus lines and seven temporary bus lines have been put into operation.

Among them, the temporary lines will go into operation from Feb. 6 to Feb. 10 and Feb. 12 to Feb. 15, according to the city traffic authorities.

The travel rush started on January 17 and will end on February 25, for a duration of 40 days.

As there are still COVID-19 outbreaks in some areas, Shanghai’s railway and transportation systems strictly follow epidemic control and prevention measures.

Shanghai Hongqiao Station and Shanghai Railway Station have increased disinfection in places and corners where passengers touch each other most frequently.

A stewardess of a high-speed train serves an old man.