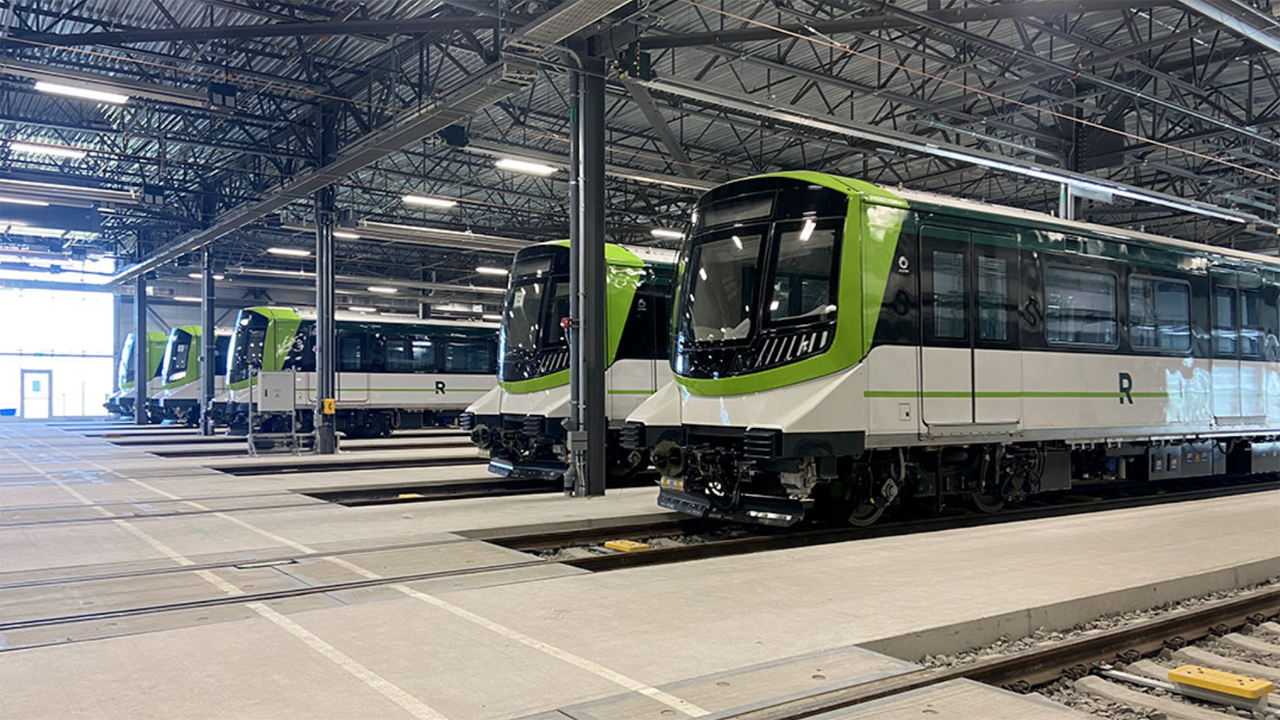 The Réseau express métropolitain (REM) has revised its network commissioning schedule due to the ongoing challenges associated with the work of the centennial Mont-Royal tunnel in Montreal. (Photograph courtesy of REM)

The agenda’s roadmap includes: making racial equity “an explicit strategic priority”; undertake an annual diversity, equity and inclusion climate assessment; review and analyze demographic data, both internal (employees, business partners, etc.) and external (traffic, community partnerships, etc.), to develop a baseline on the impact of existing policies, practices and programs on the racial equity; implement policies, practices, programs and processes to create and maintain an inclusive and equitable environment for workers and customers; and establish dedicated programs, tools, and resources that engage board leadership and staff on the meaning and importance of racial equity.

The program is “designed to meet members where they are, whether they already have a comprehensive diversity, equity and inclusion program in place with a clear focus on racial equity or are doing their first steps towards that goal,” according to APTA.

“Improving diversity, equity and inclusion at the organizational level is a priority for GCRTA,” said GCRTA Managing Director and CEO India Birdsong. “This new program will establish standardized metrics, identify critical resources, and determine how to structure recognition levels to measure and reward progress in advancing racial equity.”

The CTA, Metra and Pace Suburban Bus Regional Connect Pass is $30 and is now sold to Metra Unlimited Ride Monthly Passholders. Starting in July, it will offer unlimited rides all month on CTA and Pace with no day or time restrictions. It replaces two current passes available to Metra monthly passholders: the Link-Up Pass, which for $55 per month offered rides on CTA during weekday peak hours and on Pace at any time ; and the PlusBus Pass, which for $30 a month offered unlimited rides only on Pace.

“As the transit landscape evolves in response to the recovery from the pandemic, our agencies are working together to position transit as the most affordable and convenient way to get around the region,” said the CTA President, Dorval R. Carter Jr.

The REM released a construction report on June 20 for the 67-kilometre (41.6-mile) and 26-station automated light rail network that will connect downtown Montreal to the South Shore, North Shore , west of the island and at the airport (see map above).

“The major challenges posed by the Mount Royal tunnel forced our teams to rethink the sequence of tests and trials for the commissioning of the REM, in order to support the efforts to commission the network by the end 2024 and avoid significant delays,” REM wrote.

Upgrading a 5.2-kilometre (3.2-mile) section of the tunnel continued to affect operations, according to the agency, due to the “discovery of explosives left over from the construction of the tunnel some time ago more than 100 years, which disrupted all work”. methods used”; the “generally degraded conditions of the central wall of the tunnel arch where it passes under McGill College Avenue”; and the impacts of COVID-19 on the workforce and supply chain over the past two years. “Faced with these colossal challenges, it is not possible to start the required tests in the tunnel before the summer of 2024,” REM reported.

REM indicated that over the past few months, it has developed a plan to avoid the commissioning being delayed for several months. He understands:
• Reverse the dynamic test sequence. Instead of starting from the South Shore and gradually progressing north, the tests will begin from the North Shore, avoiding the Mount Royal tunnel.
• Deployment of tests and trials from the Saint-Eustache maintenance center rather than the Brossard one.
• Isolate the Mount Royal tunnel from the tests “to ensure that once the work and tests are completed, the entire network will be ready and in service by the end of 2024”.

The network was to open in five phases: the South Shore portion in the fall of 2022; the central section, which includes the tunnel, in the fall of 2023; the West Island segments in the spring of 2024; the North Shore segment in fall 2024; and the airport part at the end of 2024.

The commissioning schedule now has three phases: the South Shore branch (Brossard-Central station, excluding the Griffintown-Bernard-Landry station) is maintained for fall 2022; the Downtown, North Shore and West Island branches will open simultaneously at the end of 2024; and the opening of the YUL-Aéroport-Montréal-Trudeau branch is to be determined. “We are working with Aéroports de Montréal to align and optimize the new schedule, and to be able to confirm that this REM branch will be in service this fall,” reports the REM.

On June 17, the STM announced the official opening of the Côte-Vertu underground train depot in the Montréal metro. The governments of Quebec and Canada have funded the C$492.3 million project, which adds space for 10 trains, “balancing storage capacity at both ends of the Orange line,” according to the STM. As part of the project, three above-ground structures were also constructed: two auxiliary structures (one to provide an emergency exit for employees and one to provide access to a mechanical ventilation station) and a building to provide access to underground storage and AZUR train maintenance workshop.

The project also included the installation of a switch upstream of the Côte-Vertu station. This will allow the STM to increase the frequency of trains on the orange line by 25% during peak periods, “once ridership has increased enough to justify it”, noted the agency.

“Our government is making public transit a priority for the City,” said Chantal Rouleau, Minister for Transport and Minister responsible for the Metropolis and the Montreal region. “It is not only a vital means of transportation, but also an important way to reduce traffic in Greater Montreal and achieve our greenhouse gas reduction goals. In addition, the Côte-Vertu garage will improve the frequency, throughput and reliability of the orange line. This is a major gain for public transport users. By investing in infrastructure like this garage and the efficiencies it brings, we will continue to give our citizens every reason to use public transit. »