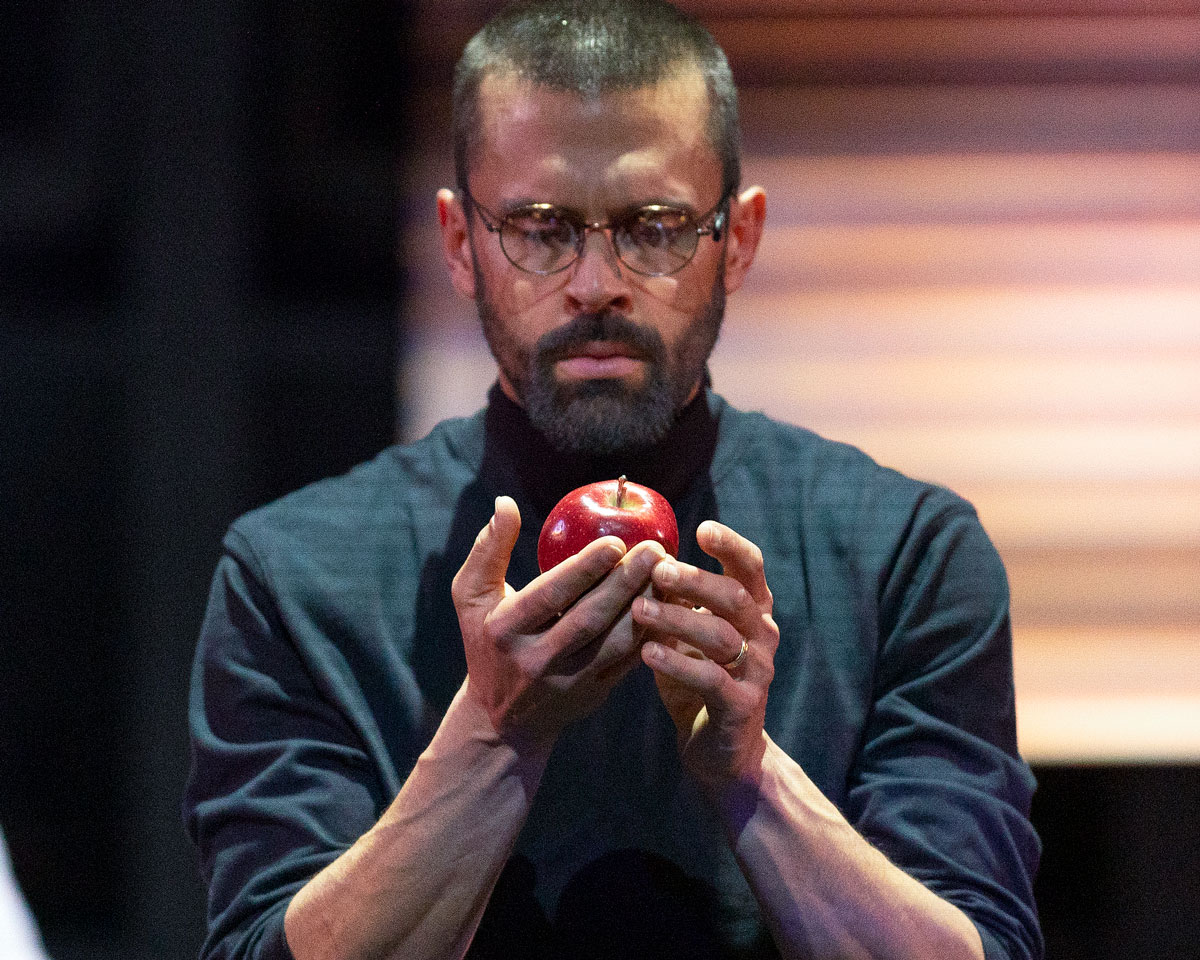 Move, Figaro: there’s a new opera hero in town, and he’s traded the powdered wig for a black turtleneck. This Saturday, the Atlanta Opera kick-off a series of four shows The (R)evolution of Steve Jobs, which chronicles the life of the late Steve Jobs, the tech visionary, futuristic guru, and founder and CEO of Apple Computers. The Atlanta Opera production, produced in conjunction with the Austin Opera and the Lyric Opera of Kansas City, is directed by artistic director Tomer Zvulun and stars John Moore in the title role of Jobs. Set to a score that combines live instruments with electronic soundscapes generated by Mac laptops, (Revolution is a decidedly contemporary foray into the same human complexities that have dazzled opera audiences for centuries.

Commissioned by Santa Fe Opera in 2017, the show was created by DJ/composer Mason Bates and librettist Mark Campbell. Its first run sold out, prompting the theater to add an additional performance, and the live recording won multiple Grammys, including Best Opera. It was composer Mark Bates’ first opera: a Guggenheim fellow and accomplished DJ, Bates is known for his instrumental compositions that combine music and technology, but a biographical opera about a perfectionist tech guru was a new field. “His collisions with the fact that he wanted everything to be elegant and controllable – but life is not controllable – is a fascinating subject for an opera”, Bates says NPR in 2017. He and Mark Campbell, a Pulitzer Prize-winning librettist, created a nonlinear account of Jobs’s life that centers his complex personal relationships and his lifelong devotion to Zen Buddhism, which inspired much of the philosophy behind Apple’s design and sensibility.

While the show was a smash hit, the disruption caused by the Covid-19 pandemic meant that only a handful of viewers got a chance to see it: the Atlanta production, delayed for more than two years, still looks like a world premiere. . Atlanta Opera’s Artistic Director Tomer Zvulun, who designed the joint production, was immediately drawn to the show’s dynamic musicality and its treatment of the quixotic protagonist.

“It’s a show about technology, innovation, invention,” he said. Atlanta. “But in the end, it’s about our fight against our own mortality.” Jobs died of pancreatic cancer in 2011; the opera’s narrative arc hinges on the dissonance between his deep desire for control and the loss of it that death inevitably delivers.

The cult persona Jobs developed in life intensified in death, but Campbell and Bates’ show never loses sight of the complicated human at the heart of its story. The small cast of characters includes both Laureen Jobs, his longtime wife, and Chrisann Brennan, mother of Jobs’ daughter Lisa, whose paternity he denied for many years. The fact that Steve Jobs was both a cold-eyed technical executive and a charismatic engine of creativity makes him a powerful subject on stage.

It also makes him a compelling character to portray, said John Moore, who will sing Jobs for most of this production run. Moore found commonalities that connected him to mercurial jobs, both in life and at work, and which helped ground his portrayal. “For me, the collaborative experience of creating this opera is like reading about how Steve Jobs collaborated with the artist who created the devices we all cherish,” Moore said during the interview. a recent phone call. “It makes the process meaningful and joyful beyond just taking proper notes.”

Moore, who grew up singing in the Catholic Church, sees the spiritual resonance of what Jobs created in Apple, both in his vision for the future of technology and in the almost ritualistic intentionality behind the brand. The scholars have assimilated From Apple stores, with their dizzying architecture and iconic design, to temples of worship; Moore noted how, just as devotees pay 10% of their earnings, many of us spend similar funds on Apple Community memberships. “Apple, I believe, is at the forefront of what is going to be the spiritual glue that will allow us to move forward together in the technological age,” Moore said.

So is Jobs a messianic figure? Moore hesitated with a laugh. “I have to pay attention [saying] this,” he said. But he thinks the great gift Jobs gave us was to strengthen our deeply human relationship with technology. “Computers were built by basically rearranging the brain,” he noted. “These things are not foreign to us, they are us.”

Director Tomer Zvulun shares Moore’s deep respect for the titanic subject matter of (Revolution. He compares the tension of Jobs’s life – which was internally chaotic but devoted to the pursuit of a balanced and unified whole externally – to Prometheus, who also sacrificed himself for the advancement of the humanity: “He’s a fascinating character”. And John Moore, Zvulun said, is a perfect fit for the role of Jobs, portraying him with the poise of an actor, which can be a rare skill in an opera singer. “John represents a new generation of singers who are also actors,” Zvulun explained. “When you look at it, you see the fruits of that labor.”

Zvulun has been Artistic Director of the Atlanta Opera for almost a decade and has also watched the evolution of the city’s audience. He arrived in Atlanta in 2013, after seven seasons at the Metropolitan Opera in New York, expecting a traditional audience with a strong taste for classical opera. But as the city has grown, so too has its curiosity: “Atlanta audiences have an appetite for a lot of adventurous things,” he said. “It’s been very exciting.”

While each season features beloved classics, this year will feature Lady Butterfly and Mozart Don Giovanni—Zvulun has been taking the company in bold directions lately, and the Atlanta audience seems eager to follow. When the pandemic ended indoor performances in 2020, the Atlanta Opera made headlines with its whimsical outdoor circus performances. In Zvulun’s hands, the company grew from three shows a year to six, with a bigger staff, a bigger budget and a much more challenging oeuvre. In June, they will take over Pullman Yards in Kirkwood for the Festival come as you arewhich presents the musical Cabaret and a chamber opera that follows the life of a transgender woman.

For Zvulun, The (R)evolution of Steve Jobs embodies opera’s bold adventure into the future. The production features a wall of 28 TVs, using technology to migrate between time periods and settings “in a very seamless and cinematic way”. And Bates’ amalgamation of live instruments and computer-generated sounds approaches music through a new generational lens, building bridges between a classic art form and a new, younger audience.

But deep down, Zvulun hastens to note, (Revolution is still driven by the same human dramas that have lit the stage since time immemorial. “It’s about this vulnerable, conflicted person, struggling with their own mortality,” Zvulun said. “I think that’s what makes this opera so powerful and successful.”