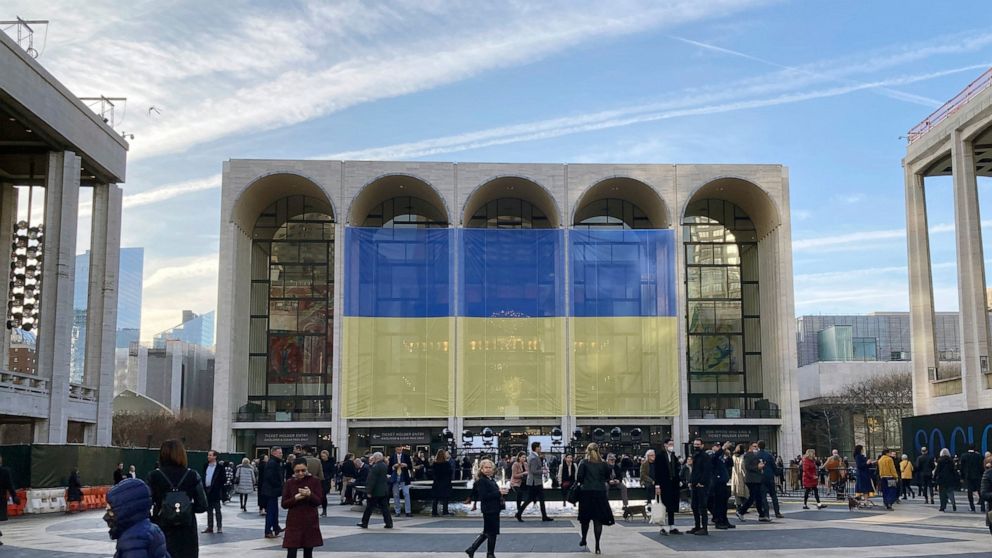 The Metropolitan Opera is hosting a special benefit concert for Ukraine

With three huge yellow and blue Ukrainian flags draped across the front of the house, the Metropolitan Opera staged a benefit for the nation under attack

NEW YORK — Vladyslav Buialskyi spoke to his mother from Berdyansk, a seaside town in Ukraine, and told her not to listen to him take the stage at the Metropolitan Opera on Monday night.

With the electricity cut off due to the Russian invasion, he didn’t want her wasting power on the internet stream.

With three huge yellow and blue Ukrainian flags draped across the front of the house, the Met staged an advantage for the nation under attack. The concert began with the 23-year-old Ukrainian bass-baritone as a soloist in front of the Met Orchestra and Chorus and Music Director Yannick Nézet-Séguin, beginning the 90-minute program with the national anthem of Ukraine.

Buialsky struggled to hold back tears and patted his heart.

“It was so moving and powerful. At times it was so sensitive and hard not to show my emotions,” he said later. “I’m so grateful to the theater, to all the people who have helped do that.”

Sergiy Kyslytsya, Ukraine’s ambassador to the United Nations, was introduced from parterre level and received a standing ovation from the crowd of around 3,600. Tickets sold out in less than 10 minutes last week for $25, and additional funds were raised through online donations.

“Members of the Metropolitan Opera company stand in solidarity with the proud people of Ukraine, so strong in the face of so much injustice, destruction and death,” Gelb said in remarks from the stage.

The concert was broadcast on radio around the world, including Ukrainian public radio.

Norway’s Lise Davidsen, rising to the rank of opera’s greatest stars, gave a moving account of Strauss’ “Vier letzte Lieder (Four Last Songs)”. She filled the hall with her silvery, soaring soprano, bringing the audience to tears when she sang “O vast and quiet peace” in “Im Abendrot (At sunset)”.

Principal horn Erik Ralske’s solo in “Frühling (September)” was haunting, and principal violin David Chan’s impassioned violin solo between the second and third verses of “Beim Schlafengehen (When We Fall Asleep)” will long be remembered. memoirs.

Set with an initial rehearsal of the orchestra and chorus together on Monday afternoon and using singers currently in New York for Met productions, the concert featured the Met Chorus and Chorus Leader Donald Palumbo. Everyone on stage wore a yellow and blue ribbon.

The anthem was followed by “A Prayer for Ukraine”, a choral work by Ukrainian composer Valentin Silvestrov, Samuel Barber’s Adagio for strings and an unusually solemn “Va, pensiero”, the chorus of slaves Hebrews from Verdi’s “Nabucco”.

After Davidsen, soprano Elsa van den Heever, mezzo-soprano Jamie Barton, tenor Piotr Beczała and bass-baritone Ryan Speedo Green joined for the final movement of Beethoven’s Ninth Symphony, Ode to Joy. All four were vibrant under Nézet-Séguin’s baton, with Green sounding particularly booming at the front of the orchestra, placed above the usual pit.

Buialsky, a member of the Met’s Lindemann Young Artist Development Program, has been with the company since 2020 and last visited Ukraine in December and January.

He was about to call his mother when she called him for the first time.

“It’s a bit cold there,” he said. “I told him to try not to use the phone as much as possible.”

He didn’t have to teach the choir the Ukrainian anthem, which they also sang before Verdi’s “Don Carlos” on Feb. 28, the night Buialsky made his Met debut as a Flemish MP.

“They already knew that,” he said.