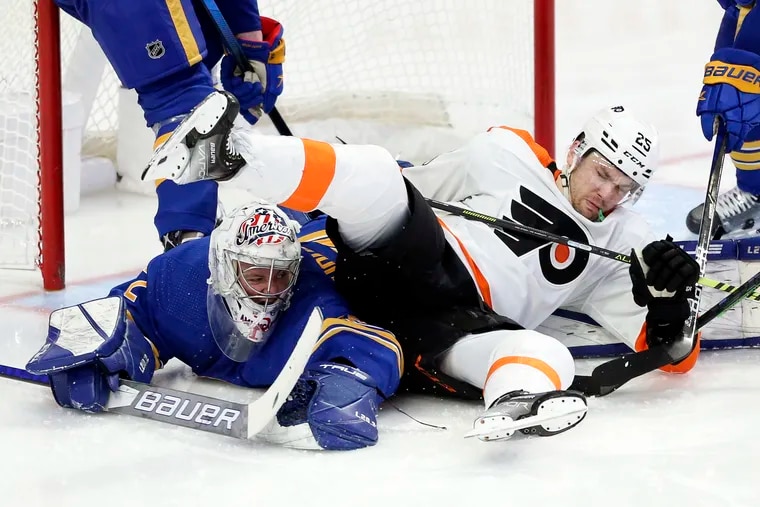 The Flyers are in last position halfway through the NHL season

Just when it seemed like the hockey gods couldn’t make things worse for the Flyers, somehow they found a way.

Down 5-2 to the Buffalo Sabers on Saturday over two periods, interim head coach Mike Yeo and the Flyers learned that winger Wade Allison – who was making his season debut after battling injuries in ankle and elbow in the past four months – would not return to the game with a lower body injury. Late in the third period, winger Zack MacEwen came off the ice and through the tunnel after colliding with defenseman Rasmus Dahlin.

Ellis has missed 37 of 41 games this season. Dressmaker, 12 years old. Hayes, 21. Farabee, eight years old. None of them are likely to return anytime soon – Couturier and Ellis have not skated and Hayes and Farabee are each expected to miss about a month after being placed in RI earlier this week.

The Flyers, 13-20-8, entered Saturday night’s game with five forwards in the roster who spent part of the season with the Phantoms (Allison, Morgan Frost, Max Willman, Jackson Cates and Gerry Mayhew) . However, regardless of experience level, interim head coach Mike Yeo said he expected more from everyone in their 6-3 loss to the Sabers that extended the Flyers’ slippage to 11 matches. With another loss on Monday, the Flyers would tie the franchise’s longest 12-game winless streak in 1999.

“We have some guys out of the lineup,” interim head coach Mike Yeo said. “We need players to perform and it’s not about young players or old players, it’s people wearing Flyers jerseys. We need them to come out and perform, because if we don’t have everyone, then obviously we put ourselves in a difficult position.

Since taking over as interim head coach, Yeo has been preaching the importance of good ‘habits’ and doing the little things right to help make the system work. When COVID-19 hit the roster near the end of their seven-game point streak to close out December, the Flyers moved away from progressing their process. But despite losses to the Boston Bruins and New York Rangers last week, Yeo found good habits were starting to emerge as players emerged from COVID protocols and the team approached four games in six nights this week.

Against the Sabres, Yeo saw “none of that” progress. Instead, he saw instances where individuals failed to adequately discharge their responsibilities.

Although the Flyers have allowed the first goal for the ninth time in their last 10 games, they haven’t completely given up their fight. Goals from defenseman Rasmus Ristolainen and captain Claude Giroux quickly helped the Flyers bounce back from a one-point deficit in the first period.

But after an equalizing goal from Tage Thompson on the power play, the bottom completely fell for the Flyers. Yeo unsuccessfully challenged the goal for offside, sending the Flyers shorthanded. Less than 30 seconds later, Thompson scored again. Two minutes after the second power-play goal, a Flyers defensive breakdown led to Peyton Krebs’ first NHL goal and what turned out to be an insurmountable Sabers lead.

“Right now I feel like we’ve hit rock bottom,” Giroux said. “We can’t take a break. We do a lot of good things there, but I mean, something bad happens, it’s really bad. I feel like when it was 2-1 we were playing well. And that power play goal that he [Yeo] challenged, I think it could have gone either way. And, you know, from the bench, to me, it looks like he was offside, but obviously they have a better view. But that kind of killed the momentum a bit.

Plagued by bad breaks on and off the ice, the Flyers are challenged to play perfect hockey with an imperfect formation. While Brassard has been skating and appears to be close to a comeback, help from top Flyers players like Hayes, Couturier, Farabee and Ellis isn’t coming anytime soon.

Meanwhile, Yeo finds himself in a position where he has to demand more from his active players, especially some of his less experienced ones, without crushing their confidence.

“There are times when there are players, you could almost say something every time they come off the ice,” Yeo said. “It’s the balancing act. This is the juggling number that we must have as coaches. But at the same time, we have to make sure there’s an understanding of what’s expected and they have to make sure they play through that.

With their loss to the Sabres, the Flyers fell bottom of the metropolitan division with a percentage of 0.415 points and a goal differential of minus 39, the fourth worst mark in the NHL. They have 16 points plus a tiebreaker disadvantage behind the Boston Bruins for second-place wildcard in the Eastern Conference and 21 points behind the Pittsburgh Penguins, Metro’s third-place team.

As their playoff aspirations become more of a dream than a reality, the Flyers haven’t found a way out of their unlucky breaks and self-inflicted misfortunes.

“It’s embarrassing,” winger Scott Laughton said. “It’s tough right now. And we have to find a way. And the only guys who are going to get through this are the players.