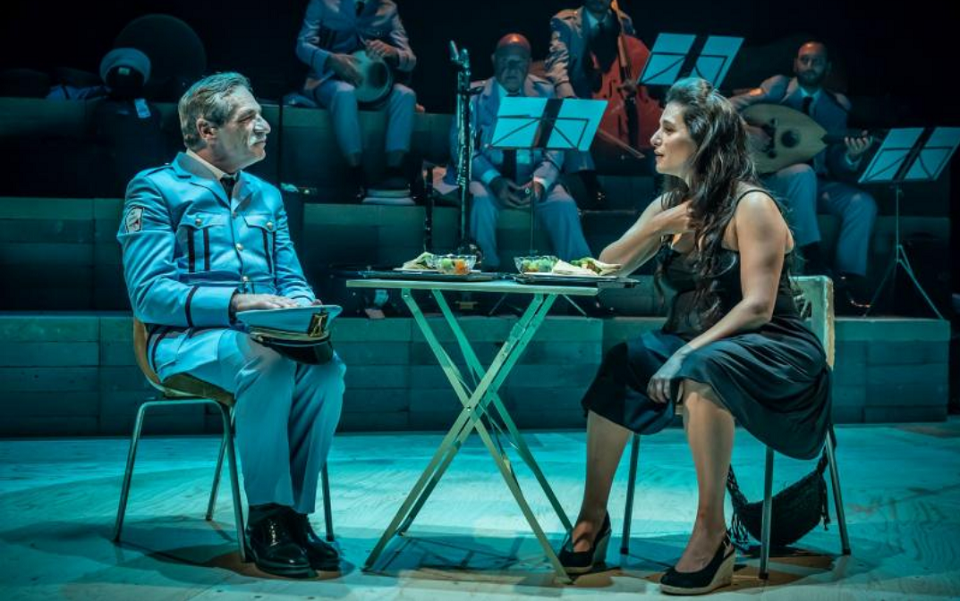 The Alexandria Ceremonial Police Orchestra has been hired for the opening of an Arab cultural center in Petah Tikva, in the Tel Aviv metropolis. But a misunderstanding when ordering bus tickets at the airport finds the group stranded overnight in Bet Hatikva, a fictional town in the middle of the Negev desert.

What follows is a series of loosely connected, yet intricately drawn vignettes that speak to the importance of music and human connection. The group’s visit was celebrated in the United States, where the original series won the Obie for Musical Theater in 2017 and the New York Drama Critics’ Circle Award for Best Musical.

When it transferred to Broadway, The Band’s Visit was nominated for 11 Tony Awards, of which it won 10, including the so-called “Big Six”; Best Musical, Best Book, Best Score, Best Actor in a Musical, Best Actress in a Musical and Best Direction of a Musical. The cast recording received the Grammy for Best Musical Theater Album in 2019.

Blues for an Alabama Sky review: A comic picture of the Great Depression, but not cohesive

All of this might set up an audience with expectations of glitz, grandeur, and razzmatazz, but they should prepare to be confused by the clean, unassuming, and intimate production.

Given the scenario of Egyptian police arriving without warning at an isolated Israeli settlement, an audience might also expect political tension, but the story – such as it is – is personal, and
the wider problems of the region are only indirectly addressed.

This proves both a strength and a weakness. By presenting a succession of small, individual dramas, it encourages audiences to look beyond simplistic binaries and offers hope that ordinary people can find social and cultural commonalities that will overcome their differences. However, such a narrow focus cannot encompass the greater reality of the situation in which events are unfolding.

Overall performance varies in quality, but is good overall. Alon Moni Aboutoul plays the band’s bandleader, Colonel Tewfiq, with the kind of repressed adherence to duty typical of a Merchant Ivory production. But it is his possible romance with local cafe owner Dina, played by Miri Meskia, that is the story’s common thread.

Meskia’s voice is breathtaking, especially in a song that celebrates the cultural bridge built between Egypt and Israel by figures such as Alexandrian matinee idol Omar Shariff and singer Umm Kulthum. The lack of truly memorable songs is eclipsed by the band’s mesmerizing on-stage performances, particularly Baha Yetkin’s oud and Andy Findon’s klezmer-influenced clarinet.

A tang of comedy and an undercurrent of melancholy ultimately saved the Donmar Warehouse production from going twee. But it’s the empathetic treatment of the characters and the fantastic musical performances that evoke a vital sense of place out of nowhere. The Band’s Visit isn’t a feel-good show, but it should make you feel better.

The visit of the group plays at the Donmar warehouse until December 3, 2022