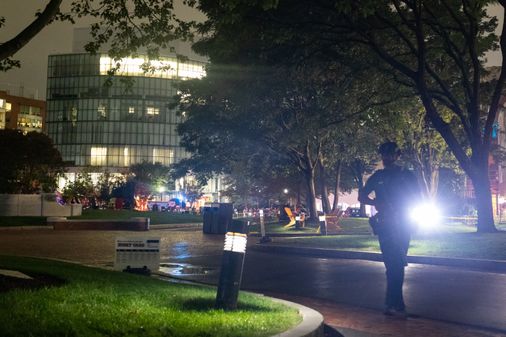 A second, similar package was also received on campus but was deemed safe, Boston police said.

The staff member’s condition was not known as of Tuesday evening. No students were injured in the incident, which prompted the evacuation of several university buildings on Leon Street, including dormitories.

The campus was secure, although investigators, including representatives from the Federal Bureau of Investigation, remained on the scene late into the night.

Police Commissioner Michael Cox said the department is working “with all of our law enforcement partners,” including the FBI and ATF.

“We will continue to work with all campus safety partners to ensure that all students here are safe as well as city residents,” Cox said at a press conference.

He advised residents who see something bad around campus or in their neighborhood to “say something” by contacting police or dialing 911.

Cox thanked multiple agencies for their quick response to the scene, including the Boston Fire Department and EMS, which helped evacuate the buildings, he said.

The investigation is ongoing, Cox said.

Michael Davis, chief of police at Northeastern University, said his department “responded within a minute.”

“It is very important to note that our campus is secure,” he said during the press conference. “We will work with our [law enforcement] partners to solve this problem.

Mayor Michelle Wu, speaking at the briefing, praised the “incredible efforts” of first responders to ensure “everyone in this school community was safe”.

In a statement, Suffolk District Attorney Kevin Hayden said his office was “ready to work with the university and our law enforcement partners on any prosecution that may develop.”

Emergency vehicles swarmed the area and part of the private university’s west campus was blocked off by police. Alarm bells were ringing from several buildings as students gathered to watch the scene behind the yellow warning tape.

Holmes Hall is located between the Lake and Meserve halls. The three buildings house various university spaces and departments, including journalism and gender and women’s sexuality studies curricula.

7:56 p.m. Boston EMS tweeted that a patient had been transported by ambulance to a local hospital.

Police and firefighters remained on site for much of Tuesday evening.

An alert sent to students in the North East urged them to avoid the area during the investigation.

University officials later announced that evening classes in several surrounding buildings would be canceled, citing the ongoing investigation. Classes will resume on Wednesday, the campus announced in a late-night alert.

“At this time, we expect the campus to be open and fully operational tomorrow,” the alert reads.

The large emergency response at Northeastern has prompted other Boston-area colleges to issue safety advisories to their students. No other explosions were reported on other campuses, officials said.

Several local colleges and universities, including Harvard and MITissued notices on Tuesday evening urging students to report any suspicious packages.

Separately, around 8:30 p.m., Boston police responded to a report of a suspicious bag at the nearby Museum of Fine Arts, according to Officer Andre Watson, a spokesman for the department.

The bag was deemed “non-explosive” in nature and police cleared the scene by 9:45 p.m., Watson said.

This breaking news will be updated as new information becomes available.