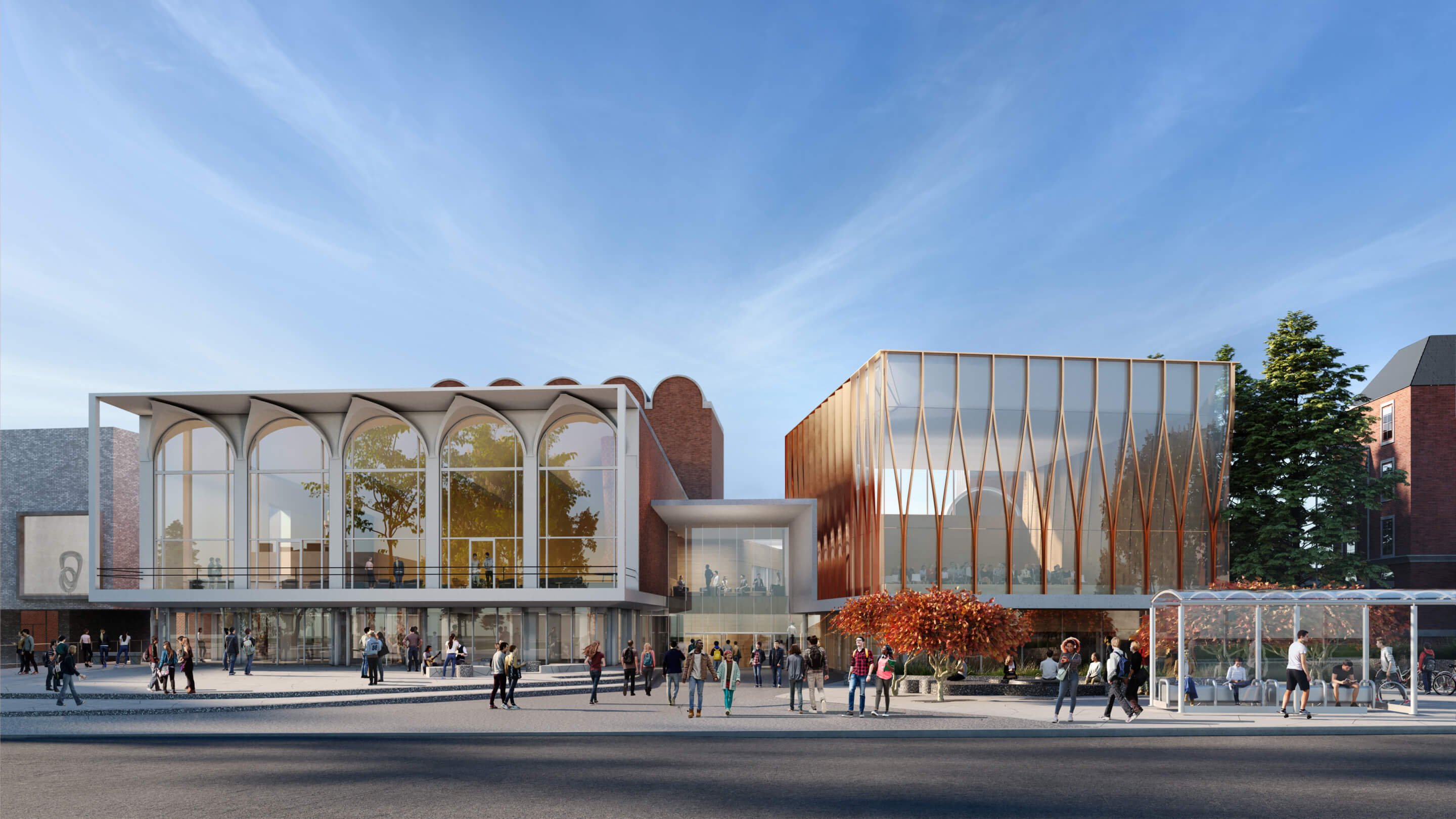 Snøhetta and Dartmouth College have shared an early batch of renders and more details on a major reimagining of the Wallace K. Harrison— designed the Hopkins Center for the Arts, a historic cultural center on the Dartmouth campus in rural Hanover, New Hampshire.

When it opened in 1962, the Hopkins Center – or simply, the Hop – was unlike anything found on American college campuses at that time: an all-in-one arts center that brought together disparate disciplines – dance, music, theatre, cinema, and more, all under one roof. The involvement of Harrison, best known at the time for his work on Rockefeller Center and as the principal architect of the United Nations headquarters in New York, was a major asset at the time, and the design of the building, in particular its vault and its window. on the front facade, foreshadows another important project by the leading modernist that soon followed: the Metropolitan Opera House at Lincoln Center.

In February last year, Dartmouth announced that Snøhetta had been tapped for the $88 million renovation of the 60-year-old building. The comprehensive effort aims to modernize the beloved but aging interdisciplinary arts facility while establishing and further expanding its physical presence within the university’s arts district. In January, Dartmouth administrators approved funding of $7.5 million to complete the design of the renovation and expansion project, which will see the facility expand by approximately 15,000 square feet while 55,000 square feet of existing space will be transformed.

To date, $50.1 million has been raised for the project according to the university.

Located just across East Wheelock Street from famous Dartmouth Green, the Arts District serves as a bustling connection point between the largest university campus and the city of Hanover. The Hop is nearby (and in the latter case, physically connected neighbors within the Arts District include Machado Silvetti’s Black Family Visual Arts Center (2012) and the Charles Moore-designed Hood Museum of Art, which emerged from a renovation and expansion project led by Tod Williams and Billie Tsien Architects in 2019. Opened in 1985, the Hood Museum houses one of the oldest and largest collections of academic art in the United States.

“To extend The Hop’s welcome, the design extends to adjacent streets on campus and its surrounding small-town New England urban fabric, drawing inspiration from nearby mountains and indigenous ecologies to celebrate its places of unique genius,” Snøhetta explained in a Press release revealing its design.

Key elements of Snøhetta’s redesign include a spacious new outdoor reception plaza inspired by the “graceful curves” of Harrison’s original architecture. In addition to serving as an outdoor extension of the Hop that will include seating and performance platforms, the plaza will provide direct access to a new central concourse dubbed the Forum. Serving as a natural gathering point where students, faculty and staff can socialize and where the public can mingle before and after performances, the Forum also acts as a connective tissue between the plaza and the reimagined existing building and its new wing. . A grand staircase provides a direct link between the ground floor and a major new hall on the second floor of the new wing, the 150-seat recital hall.

Described by the firm as a “glazed lantern,” the recital hall will overlook the plaza and the campus beyond through tapered arched windows that will be “created using an innovative curved mullion system allowing for a ample natural lighting flexible seating configurations.” As planned by Snøhetta, the new versatile and state-of-the-art venue will be “fitted with bespoke finishes and exquisite details”. Also on the second level, accessed via the Forum staircase, where the Alumni Hall is currently located, will be a new flexible space called Performance Lab.

Nestled directly below the recital hall will be the new dance studio. As its name suggests, the partially submerged space will be dedicated to dance rehearsals and is a one-of-a-kind facility for the Hop, which currently lacks a purpose-built dance rehearsal space.

The major existing spaces at the Hop, namely the 900-seat Spaulding Auditorium, the lower-level Theater Rehearsal Lab, the Moore Theater lobby space, and a popular gathering place for students known as the Top of the Hop, will be revitalized and redesigned taking into account the accessibility and mobility needs of contemporary users.

“The voices of an ensemble, the production team of a dance video, and the audience themselves all represent the creative potential of diverse participation,” Snøhetta founding partner Craig Dykers said in a statement. . “We are thrilled to extend Hop’s pioneering legacy as a place for emerging forms of artistic collaboration and creative expression by bringing new rehearsal and production spaces to the building, ensuring continued support for a variety of perspectives. and ways of doing it.”

Construction work at The Hop is set to begin later this year with plans for the New Hop top will debut in 2025. Performances and in-person programs normally hosted at The Hop will take place at other venues on the Dartmouth campus and beyond while construction is underway.

In addition to the press release issued by Snøhetta, Dartmouth also shared its own ad fully detailing what is in store.