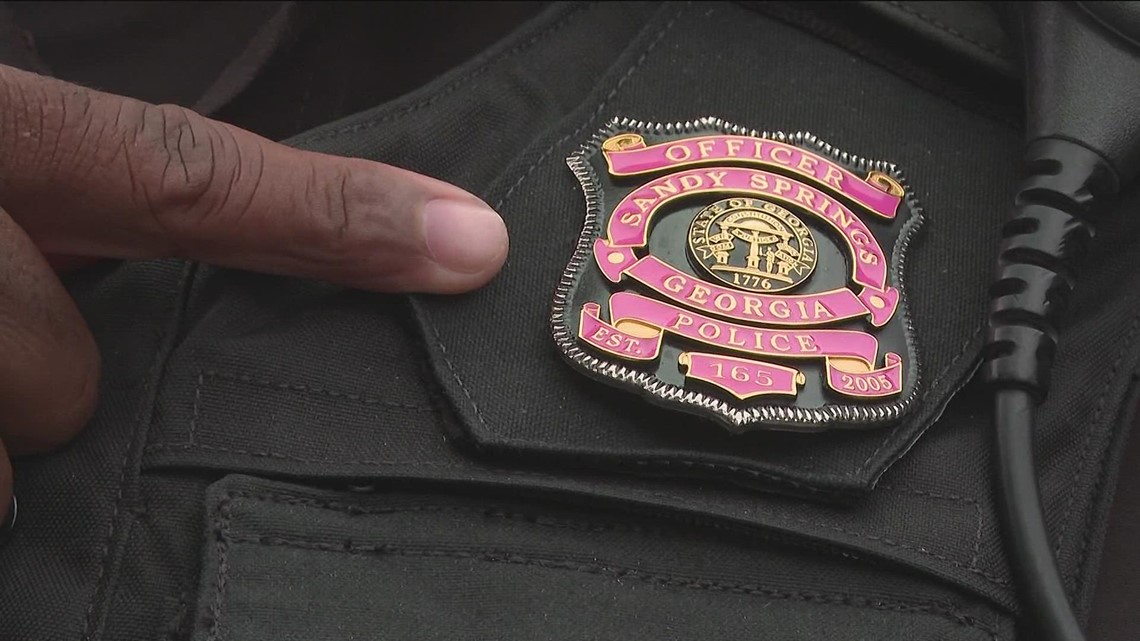 SANDY SPRINGS, Ga. — Law enforcement across the country is showing their support for breast cancer survivors and loved ones lost to the disease. Whether it’s designing cars painted with pink ribbons, wearing pink t-shirts, or donning a personalized pink badge, some officers wear pink for a special reason.

Officer James Graham joined the Sandy Springs Police Department in 2006. As a teenager, he felt the call to enter law enforcement, but nothing could have prepared him for the call his wife was diagnosed with breast cancer.

“I didn’t think about it much, because people beat him up,” Graham said. “We thought we were going to prepare for the fight, and she had a bad one. She had about five years of fighting before she lost it.”

Tiffany Graham was first diagnosed at the age of 35. It is unlikely that her daughter could also get breast cancer, as Tiffany had the BRCA gene. A gene mutation increases the risk of developing breast cancer.

“On the street, I could handle it,” James Graham said. “I never had a problem. I didn’t think it would happen. This stuff wouldn’t happen to me. Then when it happened, and I was so helpless, it just threw me on the back of my heels.”

Constable Brian Crisp, who has been with the Sandy Springs police force for more than 13 years, had an aunt and grandmother, both of whom had breast cancer. While her aunt was beating the disease, her grandmother passed away.

“My grandma, she had a few appointments where she went to the doctor, but she was never really diagnosed until she was admitted to the hospital,” Crisp said. “Once she was admitted, she never came home after that.”

RELATED: Here’s Why Breast Cancer Screening Advice Vary and How to Know Which Advice to Follow

Crisp, Graham and nearly 40 other Sandy Springs police officers purchased personalized pink badges to show their support for Breast Cancer Awareness Month. The badges cost about $108, and 10% of sales proceeds go to the National Breast Cancer Foundation, according to Sgt. Michael McGinnis.

11Alive medical correspondent Dr Sujatha Reddy, a gynecologist, said around 300,000 people will be diagnosed with breast cancer this year across the country. According to the American Cancer Society, breast cancer is the second leading cause of cancer death in women. Reddy urged people to research their family history and learn more about the disease which she says has impacted everyone in one way or another.

Reddy suggested women look for changes in skin, breast size, and any odd sensations. They should see their health care provider to have anything abnormal assessed. Reddy said advances in treatment and research have allowed more women to live with breast cancer quite comfortably, and she noted that death rates have declined among women with the disease.

“Get that yearly mammogram. It’s helped us diagnose breast cancer at an earlier stage, and we treat all cancers better if we catch it early and at an earlier stage than at a later stage where it’s a lot harder to treat,” she said.

Graham, meanwhile, is moving forward despite the tragedy. He remarried, and he and his daughter usually have dinner, go to a baseball game, and visit his first wife’s grave to honor her memory.

“I didn’t think I would lose her, so it’s important now to have family and look out for them, spend your time with them,” Graham said. “Don’t get so caught up in the things around you.”

AMA examines competition in the PBM market and integration with insurers