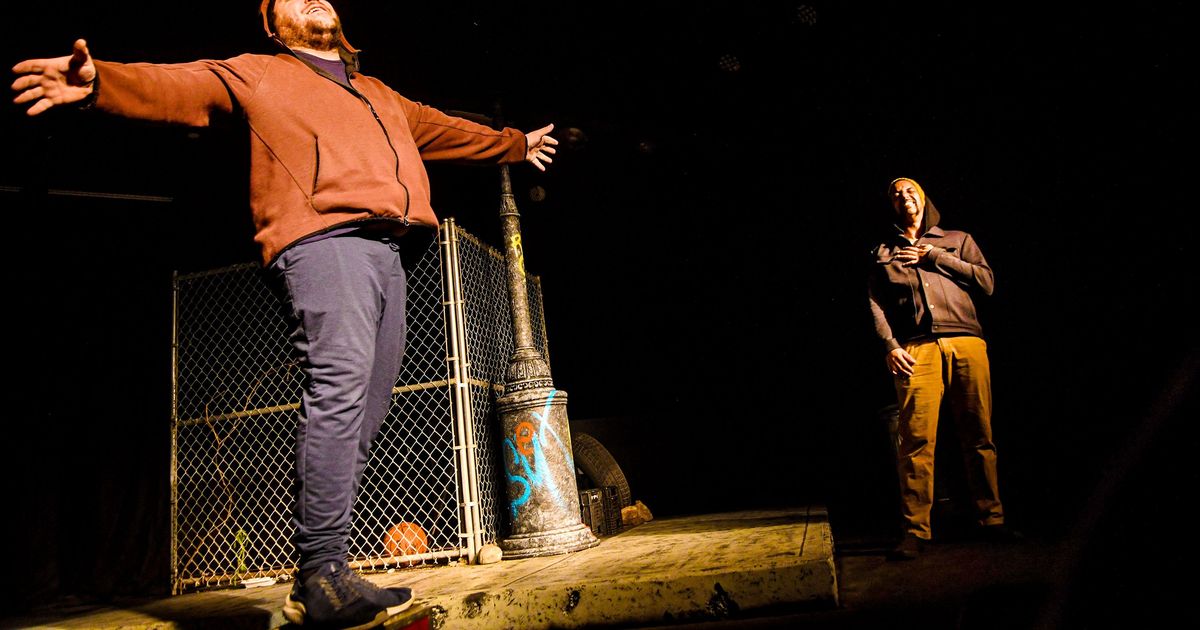 Antoinette Nwandu’s piece “Pass Over” made me nervous. Does he walk the thin line of egregious circumstances but significant substance? Although written with all audiences in mind, does it lose its black authenticity with this responsibility?

Pass Over, directed by Malcolm Pelles, is a gripping story about what it means to be Black in America, finding room for the funny, the hopeful, and the deadly without forcing anything. Influenced by “Waiting for Godot” by Samuel Beckett. “, Pass Over tells the story of two black men using escapism to find a way to literally escape their ghetto.

All was well in director Malcolm Pelles’ production at the Stage Left Theater.

There’s a black presence everywhere, with Wu-Tang clothing and MF Doom stickers on the lampposts. There’s also a universal display of black dialects as main characters Moses and Kitch bounce around their day using flavors of Chicago, Detroit and Atlanta slang, but the online deliveries are what makes Pass Over so relatable. . It could be any US metropolitan city. That’s the point.

Dahveed Bullis and Matt Slater star as Moses and Kitch respectively, giving phenomenal multi-faceted performances portraying a shared dream of “getting out of the hood” by any means necessary.

When Kitch recites a long list of his homies dying from gun violence, it helps stir up emotions about the endless violence black people face in America. Julio, Andre, Justin with the elbow rash, Kev, Da’Quan, Fat Joe, Dumb Terry, Terry’s cousin with the messed up knee, are all men who died and survived Kitch’s dreams of get out of it, and their heirlooms could be trapped in that dream too. Bullis and Slater skillfully depict the power struggles of black masculinity, homophobia, hypermasculinity, and hypersexuality.

Act I serves as an emotional journey from pessimist to hopeful, with the duo naming 10 things they will receive once they travel to the “Promised Land”, a place where hood issues don’t exist and where being black is not lethal. While that place may not exist in America, Moses and Kitch are toying with the idea, and it’s time to show Bullis’ on-stage dynamism and Slater’s hilarious skepticism, wondering about the ” difference” between caviar and fish eggs. The duo’s on-stage chemistry makes them familiar.

But that all changes when Mister, a random white man played by Danny Anderson, walks into the room. Anderson plays Mister and Ossifer, which means Officer, which is a fantastic distortion of the word if you say it too quickly, like you’re freaking out about being killed.

Mister displays a disconnect that many non-black Americans may feel toward black communities. He doesn’t give up when he hears the rapid gunshots and doesn’t remember if his mother or his mother’s “hitwoman” cooks the pinto beans a certain way. He even enjoys a picnic on the block from which Moses and Kitch beg to leave. It’s a fantastic demonstration of how white cognitive dissonance will always clash with black trauma and hypervigilance.

Once Anderson gets into Ossifer’s persona, he harasses and taunts Kitch and Moses, using racial slurs and beating up on both men, calling them boys. Around him, the duo instantly erase stereotypical behaviors that will make them more palatable, in hopes of being less killable, to police officers. The macabre display of violence is a realistic look at how hope for black prosperity can easily disintegrate in hostile anti-black environments.

Overall, all the little bits of production were exceptional. “Pass Over” shows the sadistic tradition of eternal black grain and the despair that follows. It is written about black men, performed by them, but for all to see.

With that in mind, I interviewed the most important members of the Stage Left audience: Noah Cunningham and Adrian Taylor Jr., the only black men in attendance that night.

They wore all the fashion styles that our black parents tell us not to wear in a confrontation with the police; durags, big diamond earrings, Nike jumpsuits, a black hoodie covering the head and dri-fit ski goggles as COVID protection. Their clothes showed a mature friction between moving freely in black manhood and being killed for it, a prominent struggle perfectly captured in “Pass Over.”

“They made it a point in the game to know when to talk and look ‘proper,'” Taylor said. “When you talk to more professional people, you have to act a certain way to get where you want to go in life.”

Both 19 and finishing their junior years at Eastern Washington University, they are part of a young black generation that witnessed the birth of the Black Lives Matter movement after the murders of unarmed black youths such as Trayvon Martin, Tamir Rice and Rekia Boyd. And the not-guilty verdicts and press conferences announcing that no charges would be filed for their deaths.

They called “Pass Over” a relatable display of the fears and weariness of police brutality within the black community. “The friendship they have, I really felt it when they cared about each other,” Cunningham said. “It’s not just black men keeping their heads on the pivot or protecting each other, it’s our community as a whole in these situations.”

“Even though we black men have our differences, we know when to come together and when to protect each other,” Taylor said.

Cunningham is also part Samoan and sees similarities between white people who learn about anti-black racism through “Pass Over” and its Samoan parent who understands the plight of black people. He enjoyed Anderson’s dual role of Ossifer and Mister.

Overall, the two agreed that Pass Over captured a damning subject matter seamlessly. However, since whites don’t experience anti-black issues, the men hope that Pass Over sticks and that the privilege of detachment doesn’t erase the important message of the piece.

“I know there were a lot of white people here today, and this piece is a start of change,” Taylor said. “I like what they are doing with this piece.”

“But that’s the first step: recognizing that racism and police brutality is one thing. I feel like they gave a little insight into what we’re going through,” Cunningham said. “I don’t feel like anyone here can fully understand unless you’re black, though.”

Pass Over runs through June 19, and half of ticket sales purchased on Thursday will benefit the NAACP. For more information, visit stagelefttheater.org/.