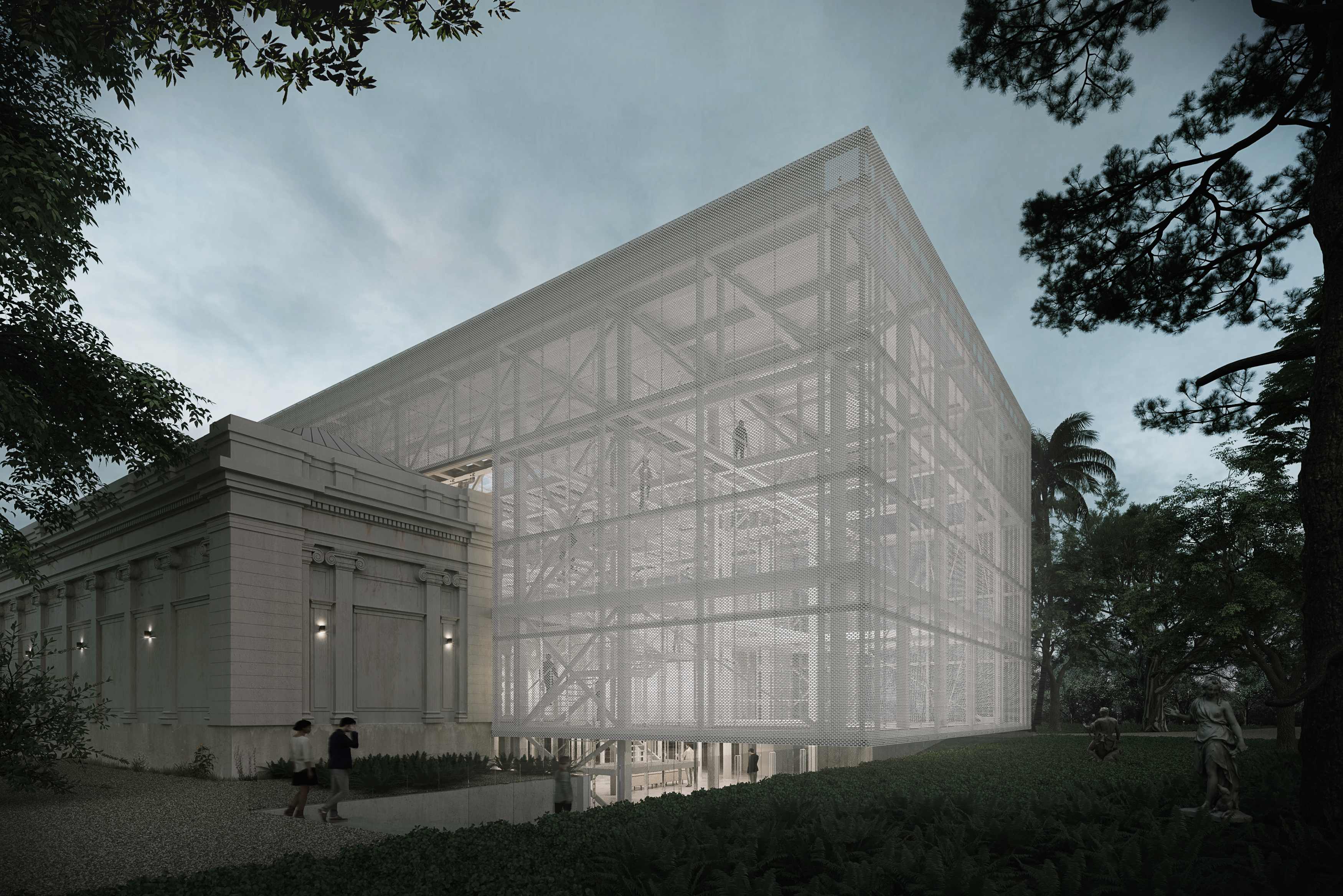 Patrimonio Futuro proposes a reactivation and an extension of the Museum of Fine Arts Juan Manuel Blanes, on the occasion of the celebration of its centenary. The book addresses the issue of heritage buildings and their contemporary uses, taking a stand and proposing a possible course of action. The enhancement of pre-existence, new modes of exhibition, technological advances, the versatility and flexibility of spaces; are some of the factors that enter into dialogue to generate a synergy favorable to the building and its program

The Blanes Museum is located in the Prado, a landscaped area of â€‹â€‹great historical significance for the city and one of its main green lungs. It is a node of urban and metropolitan scale which has green, sporting and recreational spaces, as well as a wide variety of cultural proposals.

The building was originally designed as a casaquinta in 1870 by Ing. Juan Alberto Capurro, as a rest home for the Raffo family.

Currently the museum is working to the limit of its capacity. The exhibition space is only enough to exhibit 5% of its collection (over 4000 pictorial pieces and 200 sculptures). It does not have workshops or classrooms that allow visitors (about three schools per day); while alternative activities such as lectures, concerts or exhibitions should be organized in the cloister, which has been fitted with a temporary skylight that can be used throughout the year.

The project aims to act on an existing space: the arcaded cloister. As already mentioned, today it has become a multipurpose space in which various activities are carried out; but under strong spatial, acoustic and thermal constraints.
It is the only exterior space of the building, where the axial axis ends and where a strong link with the park is established.

The operation triples the existing cubic footage and makes it an editable space, capable of accommodating different programs with multiple spatial configurations. The new volume â€œplugsâ€ into the back of the building, while the enveloping skin establishes with it a play of transparencies and opacities.

The image of the new building offers from a formal and material point of view a counterpoint between the opaque and the solid of the original building; and the lightness and permeability of the new enlarged volume. This is achieved by choosing perforated metal panels that surround the glazed volume.
The encounter with the original work is resolved by means of glass panels, creating a space between the two volumes. The curtain wall surrounds the structure, forming a glazed prism and reducing carpentry to the minimum necessary; also offering better thermal performance.

Structure is an intrinsic element of the proposal. Its behavior emulates that of a jib crane, resting on the ground on the heads of massive piles and flying over the preexistence.

Stiffening core_ The loads are transmitted vertically to the ground through the core which also houses the vertical circulations and the multi-height fireplace. It has external transverse tensioners -UPN160- which offer greater resistance and also receive the lateral thrusts caused by the wind.

Corbeaux_ They consist of cross-linked beams in both directions. The main corbel has the necessary height to accommodate the raised access floor; while its counterweight meets the covered access to the building.

The different speeds at which disciplines such as the performing arts evolve, added to the constant technological advances; they impose a permanent revision and adaptation of the architecture.
For this reason, the proposal does not claim to be a definitive and closed solution, but rather to transform it into an infrastructure compatible with the demand of possible future programs.
The versatile atrium is the space where all these concepts are synthesized, the meeting point between the architecture of almost a century ago and contemporary high technology.

This “exhibition machine” works from a system of retractable slabs with adjustable heights and slopes which allows various spatial configurations; next to a technical blanket that can be configured as a conventional stretch, or to which spotlights, curtains or screens can be hung. With a variable capacity, the space can accommodate multiple activities, such as conventional conferences, large-scale artistic interventions or contemporary plays, where the stage-public border is diluted and the public becomes part of the show. .

Art critic Beat returns to the arts in 2021