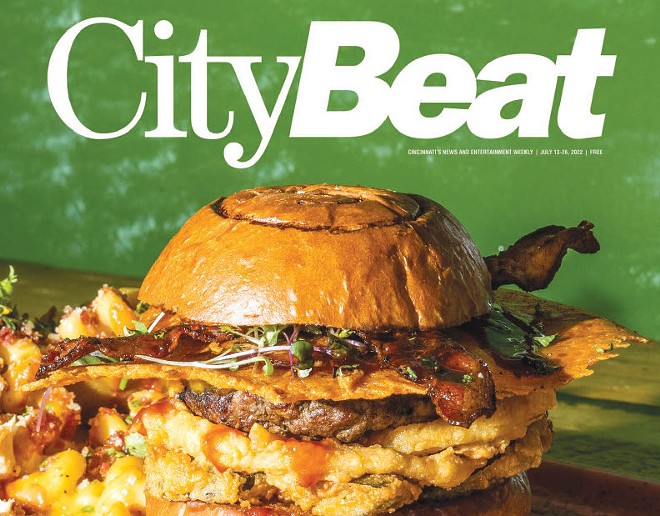 
CityBeat‘s Burger Issue is finally here. This time around, we’re getting the craziest, most over-the-top burgers — stacked with unusual toppings like macaroni and cheese, lobster, and peanut butter — from restaurants in Greater Cincinnati. For some, the more chaotic the burger, the better. Keep reading to discover all the stories you can find in our latest print issue, on newsstands now.

The Burger Issue: 15 outrageous burgers to satisfy all your chaotic cravings
By CityBeat Personal
This list of extravagant burgers features 15 local favorites, all covered in indulgent ingredients ranging from peanut butter to mac and cheese and fried eggs to lobster. Use it as a starting point to satisfy your most chaotic cravings. Lily CityBeatto discover which extraordinary burgers made the difference.

Manga Manga is Cincinnati’s new one-stop-shop for Japanese comic book fans
By Mackenzie Manley
Located in College Hill, Manga Manga, which sells manga or Japanese comics, opened in April. According to owner C. Jacqueline Wood, it is Cincinnati’s first physical space dedicated solely to manga and fills what she saw as a void in the city. The store offers nearly 5,000 books from a range of genres aimed at specific age groups, including shōnen (teenagers), seine net (Men), shoujo (adolescent girls), Josei (women) and kodomomuke (young children). Across slices of life, sci-fi, LGBTQ+ issues, horror, non-fiction, and more, readers of all preferences can find titles. Lily CityBeat‘s story to learn more about the bookstore.

“The Band’s Visit” to the Aronoff Center in Cincinnati is a musical balm for today’s trauma
By CityBeat Theater critic, Rick Pender
How does a short indie film from 2007 evolve into an award-winning Broadway musical a decade later? Itamar Moses, who wrote the book for The group visitrecount CityBeat how this musical was born. The musical’s tour will take place at the Aronoff Center for the Arts for a week-long engagement starting July 19. Lily CityBeatto learn more about the interesting story behind the musical.

Carnegie’s summer theater series features heartfelt adaptations and a gripping story about the legendary Cincinnati bootlegger
By CityBeat theater critic, Rick Pender
Producing musicals in July and August is a long-standing theatrical tradition called “summer stock” – using a core cast to present a brief season of shows on a rotating basis. The Carnegie in Covington is taking that approach this year with a series of shows to entertain audiences at its Otto M. Budig Theater. He kicked off the season in mid-June with an energetic staging of Stephen Sondheim’s fairytale musical, In the woods. Added to the mix from July 16, Jonathan Larson’s rock musical, Lease. A third show George Remus: a new musical, on the legendary bootlegger, will debut in August. The final performances of the shows take place from August 26 to 28. Lily CityBeatfor more on the musical inspired by Cincinnati’s most notorious smuggler.

Bromwell’s newly refurbished Härth salon in the city center will reopen later this month
By Brian Cross
Being Cincinnati’s oldest business, Bromwell should be a household name to most locals — after all, it’s been around since 1819. But a recent addition might delight even old-school residents. Bromwell’s impressive retail space on Fourth Street downtown serves as a major showroom for its leading fireplace and accessory offerings. The 10,000-square-foot, two-story space features gas fireplaces, woodstoves, mantels, and related products experienced in room-sized displays with furniture and décor. The relatively new Bromwell Härth Salon next door serves as an extension of this showroom and an avenue to bring the Bromwell brand even more to life. Lily CityBeatto find out what to expect from the rebranding and redesign of Bromwell’s Härth Lounge.

Greater Cincinnati’s Hottest New Restaurants and Bars
By the staff of CityBeat
Cincinnati’s dining scene has warmed up, and judging by the number of new restaurants slated to debut later this year, it shows no signs of cooling any time soon. Dozens of restaurants have opened so far this year, from Mexican joints to a ramen spot, a new Findlay Market stand and a new Italian restaurant in Covington. Even new nightlife spots are popping up, including the city’s first gin bar and a new LGBTQ+ nightclub in place of the Under Zero lounge. Lily CityBeatto get a taste of what people are buzzing about this season.

Mary Chapin Carpenter discusses latest album and pandemic-era plans ahead of upcoming Cincinnati performance
By Alan Sculley
Mary Chapin Carpenter’s extensive summer tour – which includes a stop at Memorial Hall in Cincinnati on July 19 – will give Carpenter her first opportunity to showcase songs from dirt and stars in a full band setting. She was due to tour in 2021 with Shawn Colvin before a shoulder injury forced her to drop out. Lily CityBeatto learn more about Carpenter’s recent projects and how they will be part of his upcoming show in Cincinnati.

A Cincinnatian Plays a Big Role in Leonard Cohen’s ‘Hallelujah’ Fame
By Steven Rosen
Leonard Cohen’s “Hallelujah” – by turns sacred and profane, mournful and determined – has become such a familiar and admired song that it has achieved classic status. His remarkably long journey to get there was well documented in the 2012 book Sacred or Broken: Leonard Cohen, Jeff Buckley and the Unlikely Rise of “Hallelujah” by Cincinnati native Alan Light. Due to the success of the book, it has become an important landmark along the “Hallelujah” trail. Now there’s a new documentary inspired by the book – Hallelujah: Leonard Cohen, A Journey, A Song, which opens on August 5 at the Mariemont Theater. Lily CityBeatto learn more about Light’s unique “Hallelujah” journey.

Sound advice: Psychedelic furs will bring plenty of 1980s nostalgia to the next Cincinnati performance
By Jason Gargano
Those looking to hear the Furs’ beloved ’80s production during the Cincinnati tour stop will no doubt be sated – the aforementioned hits, as well as “India”, “Heartbreak Beat”, ” Heaven” and the ever-timely “President Gas” are setlist staples – but expect a hefty dose of made of raintoo. Lily CityBeatfor more on what The Psychedelic Furs will be showcasing at the July 20 show.

Sound advice: Robert Glasper will bring infectious creativity to the Cincinnati show
By Jason Gargano
A who’s who of contemporary musical artists has mingled with Robert Glasper, a classically trained pianist whose contagious creativity has propelled numerous projects. While Glasper’s contributions to various projects over the past few years – including providing some soft piano pieces on Kendrick Lamar Pimp a butterfly and as music producer for Don Cheadle’s biopic Miles Davis miles ahead — remained fruitful, the pandemic inspired him to return to familiar territory with the recent Black Radio IIIwhich features appearances from Killer Mike, Esperanza Spalding, HER, Posdnuos, Jennifer Hudson, Q-Tip and more. Lily CityBeatfor what to expect at Glasper’s Ludlow Garage show on July 23.

Insider tip: The Backstreet Boys will give a ‘larger than life’ performance at the next Cincinnati show
By Maija Zummo
Put on your going out top, feed your Tamagotchi, and slide on some Dr. Pepper Lip Smackers because Backstreet is back — at least at the Riverbend Music Center. Cincinnati may lay claim to one of the great boy bands of the late 90s/early 2000s like ours – hi, 98 degrees – but the fame of Nick Lachey and Co. is no match for it of five harmonizing Orlando idols. Lily CityBeatfor more on the boy band’s welcome return.

Look for CityBeat‘s Burger Issue at the stands and around Greater Cincinnati.

Send CityBeat a news or tip or submit calendar event.

Masks could return to Los Angeles as COVID surges nationwide