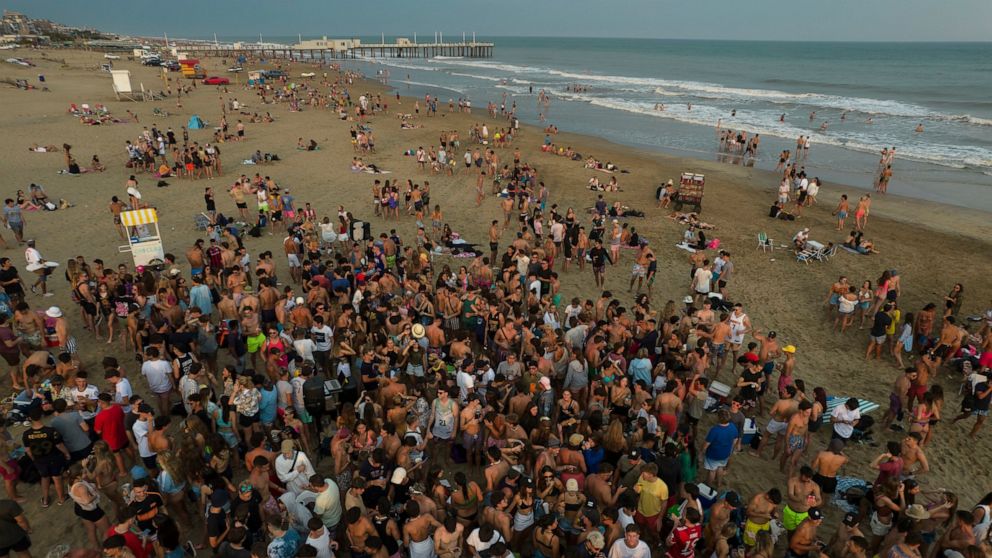 BRASILIA, Brazil – The omicron variant of the coronavirus that is beginning to spread across South America is putting pressure on hospitals whose employees are taking sick leave, leaving facilities understaffed to cope with the third wave of COVID-19.

A major hospital in Bolivia’s biggest city has stopped admitting new patients due to lack of staff, and one of Brazil’s most populous states has canceled scheduled surgeries for a month. Argentina’s Federation of Private Health Care Providers told the AP that it estimates around 15% of its health workers are currently infected with the virus.

The third wave “is affecting the health team a lot, from cleaning staff to technicians, with a high percentage of sick people, despite a complete vaccination schedule,” said Jorge Coronel, president of the Argentine medical confederation. “Although the symptoms are mostly mild to moderate, this group needs to be isolated.”

It wasn’t meant to be this way: South America’s vaccine intake was eager once the vaccines were available. About two-thirds of its roughly 435 million people are fully immunized, the highest percentage of any region in the world, according to Our World in Data. And health workers in Brazil, Bolivia and Argentina have already received reminders.

But the omicron variant defies vaccines, driving up the number of cases. Argentina averaged 112,000 confirmed cases per day in the week to January 16, up from 3,700 a month earlier. Brazil’s health ministry still recovering from hack that left coronavirus data incomplete; even so, it shows a jump to an average of 69,000 daily cases over the same seven-day period, up 1,900% from the previous month.

Omicron spreads even more easily than other strains and is already dominant in many countries, including Brazil and parts of Argentina. It also more easily infects those who have already been vaccinated or infected with earlier versions of the virus. Early studies show that omicron is less likely to cause serious illness than the delta variant, and vaccination and booster shots still offer strong protection against serious illness, hospitalization and death.

Lesser severity makes people in South America loath to give up their long-awaited summer which they were told would mark a return to normality after a full vaccination. The lingering pandemic often seems like an afterthought to people on the go who don’t see how omicron began to affect medical personnel. The beaches were packed this weekend in Argentina and Brazil.

Matías Fernández Norte, a surgeon at the Hospital de Clínicas de Buenos Aires, told the AP that the high number of professionals on leave generated “physical and spiritual fatigue, in addition to the stress of dealing with a patient on the wire. “.

“You have the impression of living in a parallel reality. On the street you meet a world that doesn’t seem to feel the pandemic,” he said. “Sometimes it feels like people have forgotten. Unfortunately, that’s how we feel.

The Brazilian Council of State Health Secretariats estimates that between 10% and 20% of all professionals in the health network – including doctors, nurses, nurse technicians, paramedics and others in direct contact with patients – have been on sick leave since the last week of 2021.

The press office of Rio de Janeiro’s state health secretariat told the AP that about 5,500 professionals have left their jobs since December. All scheduled elective surgeries in the state health system have been suspended for four weeks. With regard to emergency care, relocations and overtime are used as palliative measures.

“Forty percent of our staff are on sick leave,” Marcia Fernandes Lucas, health secretary for the municipality of Sao Joao de Meriti, in the Rio metropolitan area, told the AP in his office. “We are able to work with this 60% by redeploying them (between health centers).

Bolivia’s public hospitals are operating at 50-70% capacity due to the high number of infections among healthcare workers, according to the Bolivian doctors’ union. In Santa Cruz, the most populous city in the country, the children’s hospital is overwhelmed – but less by its number of patients than by the number of employees who fall ill, according to Freddy Rojas, its vice-director. Last week, the facility stopped admitting new patients.

“There was a collapse, because we don’t have replacements,” said José Luís Guaman, acting president of the Santa Cruz doctors’ union.

The risk of stopping medical services in the Argentine province of Buenos Aires – the most populous in the country – is such that health workers have been allowed to return to work even if they come into contact with an infected person, provided that they are asymptomatic and vaccinated. Other provinces in Argentina are expected to adopt the same rules in the coming days, according to guidelines recently released by the Ministry of Health.

Similar measures are being adopted by authorities in France and the United States, where omicron has been testing hospital systems for weeks.

Chile has seen a steady increase in its number of cases, leading to the reactivation of public and private hospital beds, but so far the country has not experienced hospital overload. Peru has also seen its number of cases increase, but its facilities are not yet suffering.

The Pan American Health Organization said on Wednesday it expects omicron to become the predominant variant of the coronavirus in the Americas in the coming week. Ten countries in the region – particularly in the Caribbean – have not reached the target set by the World Health Organization to have 40% of citizens fully immunized by the end of 2021.

While a smaller fraction of people develop severe disease from the highly transmissible variant, the crushing contagion and resulting strain on hospitals means omicron should not be underestimated, said Lula, from the council of the Brazilian health secretariat.

“People need to understand that the argument that omicron is ‘soft’ is wrong,” Lula said. ———