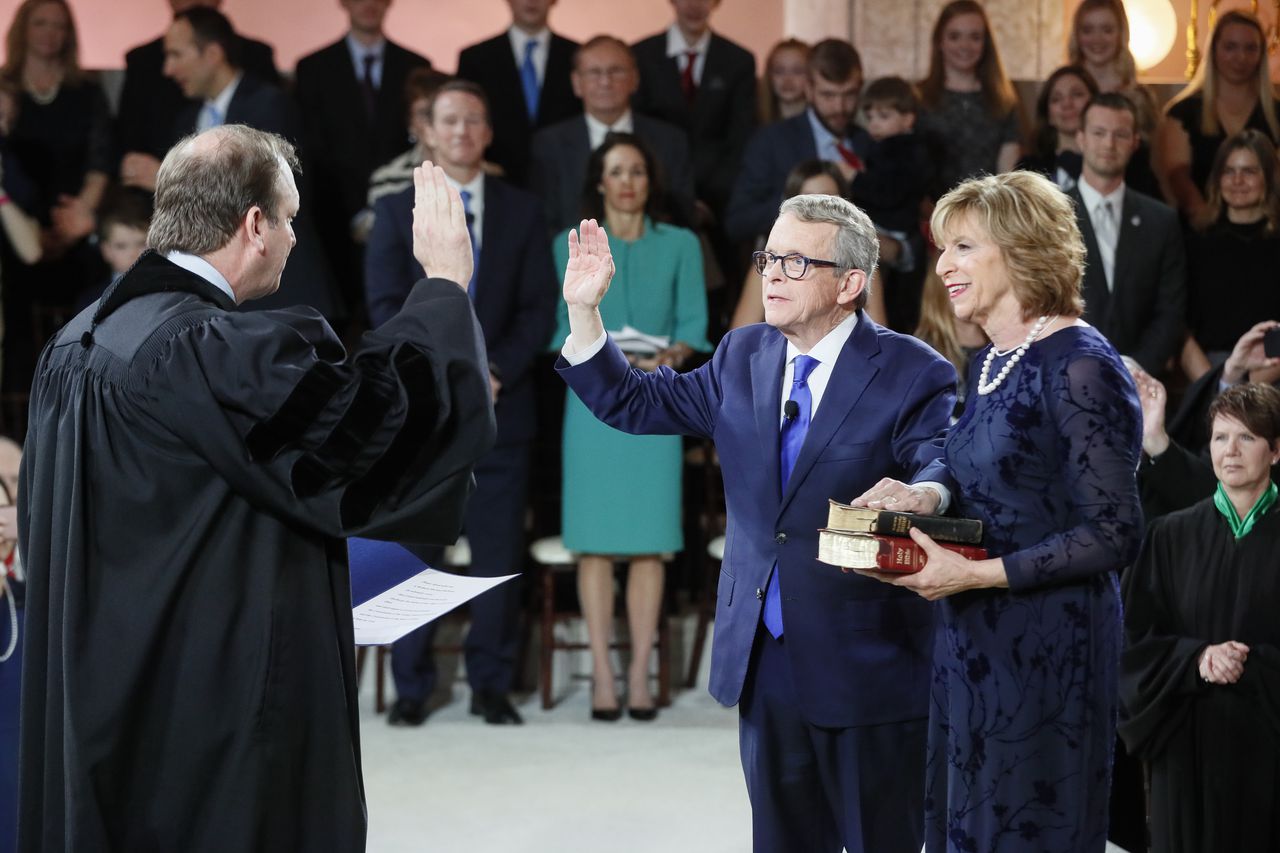 Ohio Supreme Court Judge Pat DeWine to Not Recuse himself from Lawsuit Despite Father’s Involvement: The Wake Up for Friday, October 1, 2021

Subscribe to the alarm clock, cleveland.comfree morning newsletter, delivered to your inbox on weekdays at 5:30 a.m.

The streak of sunny days continues today and Saturday, with highs expected to hit the 70s low today and the mid-70s on Saturday. Showers and thunderstorms are possible Saturday evening and through Sunday. The weather will be in the low 70s on Sunday. Read more.

Pat DeWine: Ohio Supreme Court Justice Pat DeWine said he had no plans to recuse himself from hearing a trio of lawsuits challenging the new House and Senate districts of the State his father, Governor Mike DeWine, voted to approve. Andrew Tobias reports that Judge DeWine has previously recused himself from prosecution involving decisions made by his father, including last month, when he wanted to “avoid the appearance of impropriety”. But in the redistricting cases, Judge DeWine said his father was just one of seven members of the Ohio Redistricting Commission, which approved the cards.

Deadline missed: Responsibility for drawing new congressional districts for Ohio will officially pass to a seven-member elected commission after Republican state lawmakers fail to present or pass a map proposal by the legal deadline Thursday, reports Andrew Tobias. The Ohio Redistribution Commission, on which Republicans hold five of seven seats, now has until Oct. 31 to approve new district lines. Any card, which would be in effect for 10 years, must get approval from the two Democrats on the committee.

Recall shots: The Cleveland Clinic is now scheduling a COVID-19 vaccine booster for qualified clinic patients and non-patients, she said Thursday. Julie Washington reports that clinic patients can schedule their booster injection through MyChart or by calling 216-448-4117. Non-clinical patients can call the scheduling phone number. Clinic hours are available Tuesday to Friday, 9 a.m. to 4 p.m.

Separation room: One of Cleveland’s most iconic buildings is set to be renamed in response to a large donation to one of the city’s most treasured institutions. Zachary Lewis reports that on Thursday the Cleveland Orchestra announced that Severance Hall would be nicknamed Severance Music Center in light of a $ 50 million grant from the Jack, Joseph and Morton Mandel Foundation. The main hall of the building will be renamed Mandel Concert Hall.

Cleveland East: Most lawsuits involving East Cleveland cops stem from a minor traffic violation, such as tinted windows or a broken tail light. But Cashay Carter believes the officers chased her car for no reason. Olivia Mitchell opens up about Carter, who is currently serving a one-year sentence in a women’s correctional facility for a lawsuit she deems inappropriate. She has pleaded guilty to carrying concealed weapons and attempting to disobey a police officer’s order or signal, but believes the police never had a reason to stop her car.

This week at CLE: After facing opposition from business and medical organizations, Democrats and some Republicans, a bill that would allow businesses to impose coronavirus vaccines has been referred to committee for more work. We’re talking about why support for the bill collapsed this week in the CLE, cleveland.comhalf-hour daily news podcast.

Covid case: Ohio coronavirus cases per 100,000 population in the past two weeks averaged 616.7, according to the Ohio Department of Health, the first time in 12 weeks the state has experienced a decrease. Laura Hancock reports that Ohio’s per capita rate announced Thursday fell from 698.7 cases per capita on September 23.

Schools and COVID: Cincinnati Public Schools again reported the highest number of new COVID-19 cases among students and staff in the latest weekly update from the Ohio Department of Health. Alexis Oatman reports that the school district had 192 new student cases and 36 new staff cases, the data showed. The Cleveland Metropolitan School District reported the fourth highest number of new infections this week, with 86 among students and 16 among staff.

Judicial appointments: As part of an effort to appoint federal judges who reflect the country’s diversity, President Joe Biden on Thursday announced a trio of candidates from northeastern Ohio, whom the administration all described as ” extraordinarily skilled, experienced and dedicated to the rule of law and our Constitution. Sabrina Eaton reports that David Augustin Ruiz, Charles Esque Fleming and Bridget Meehan Brennan would all sit in the U.S. District Court for the Northern District of Ohio if confirmed by the US Senate.

Unemployment fraud: Private sector figures who have worked with Ohio’s much-criticized unemployment system to curb a massive wave of fraudulent claims defended the state’s anti-fraud efforts in a legislative hearing Thursday. Ohio unemployment officials have known since the summer of 2020 that they are the target of large-scale crooks, reports Jeremy Pelzer. But other states took even longer to act, said Haywood Talcove, CEO of LexisNexis Risk Solutions Government Group.

Tripping process: A man who fell down the stairs of a Cleveland home after tripping over a pair of his then-fiancée’s shoes cannot sue her, an appeals court said Thursday. Cory Shaffer reports that John Walworth suffered multiple fractures and racked up more than $ 80,000 in medical bills after falling down the steps in his now wife Judy Khoury’s basement in February 2018, his lawyer argued in court. Walworth said he hadn’t seen her shoes because he was carrying a box of vinegar in his basement for her.

Prison population: Of the 43,200 inmates in state prisons, the Allen-Oakwood Correctional Facility in Lima has the most: 3,513. There are 28 state prisons in Ohio, and Laura Hancock lists the 10 most populous .

Pistol holster: A federal judge on Thursday added nearly five years to the jail term for a criminal who shot Cleveland police officers. John Caniglia reports that U.S. District Judge Patricia Gaughan ordered Darryl Borden of Cleveland to serve 57 months in prison after serving the seven to ten year sentence Cuyahoga County Judge Michael Russo imposed on him in June for the shooting.

Lions at Akron Zoo: Five African lions at Akron Zoo have tested positive for COVID-19, the zoo said Thursday. Cameron Fields reports that the lions were allegedly exposed to the virus by a staff member who later tested positive. They will remain in their habitat, the Pride of Africa area of ​​the zoo, as they are being treated for their symptoms.

Childcare: An issue plaguing the workforce even before COVID-19 hits – access to safe, quality child care – has only worsened since the start of the pandemic. Hannah Drown reports that Ohio business owners and industry experts have discussed the causes of the child care crisis, the impact of the pandemic on the problem, and what people can do about this during a webinar Wednesday by The Hunt Institute.

Portrait of Renoir: Three years before his death in the disastrous Franco-Prussian War of 1870-71, the young French impressionist Frédéric Bazille painted a remarkably fresh and realistic portrait of his friend and colleague, the painter Pierre-Auguste Renoir. Steven Litt reports that Renoir’s portrait, which sparkles with crisp, distinct brushstrokes, is among the latest acquisitions announced by the Cleveland Museum of Art on Thursday.

Geneva-on-the-Lake: The Loge de Genève-sur-le-Lac is one of the crown jewels of the region, but with the state expected to take control in 2022, its future is uncertain. Susan Glaser recounts her adventures at the lodge and why she hopes her beauty can remain in state control.

State park lodges: The Lodge at Geneva-on-the-Lake in Ashtabula County is the most popular resort in the state park system and the most expensive. Susan Glaser presents the 10 Most Popular Lodges in Ohio State Parks.

Things to do: “The Lion King” begins a two-week run at Playhouse Square, and the Cleveland Horror Fest, an inaugural film festival, arrives at Atlas Cinemas in Shaker Square. Joey Morona reports on things to do this weekend as fall begins.

‘Shang-Chi’: The bus fight scene in “Shang-Chi and the Legend of the Ten Rings” is one of the film’s most memorable moments, with Shang-Chi, played by Simu Liu, fending off several assassins. Destiny Daniel Cretton, the film’s director, breaks down the scene for cleveland.com’s sister site, Vanity Fair.

Memories of the NFL: Baltimore Ravens kicker Justin Tucker posted a record 66 yards in the NFL last Sunday against the Detroit Lions, and Jacksonville Jaguars wide receiver Jamal Agnew hit a short field goal attempt for a record from 109 yards against the Arizona Cardinals. Marc Bona reports that Tucker’s white jersey, black pants and socks, as well as the shoes used by Agnew’s game, are now on display at the Pro Football Hall of Fame.

After years of frugality, Richmond Heights will soon be debt free Read More