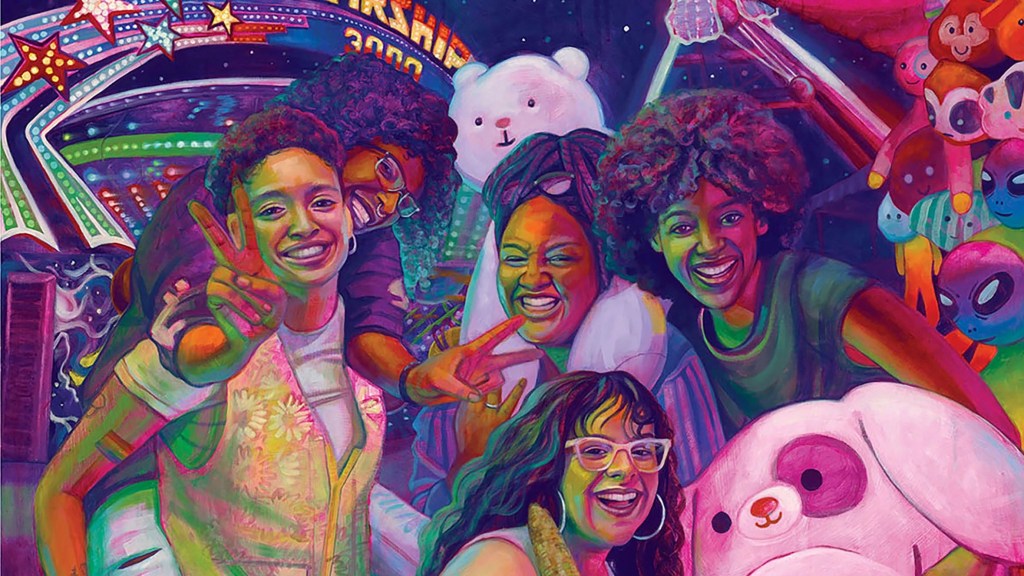 A Minneapolis artist’s depiction of the diversity and vibrancy that drives summer nights at the Great Minnesota Get-Together has been selected as the official memorial art of the 2022 State Fair.

The 3-by-4-foot oil painting by Leslie Barlow was unveiled Thursday at the State Fairgrounds in Falcon Heights.

“I wanted to communicate the energy, excitement and joy that the fair brings to me,” Barlow said, according to the Minnesota State Fair Foundation, which has sponsored the annual art competition for 18 years. “The fair often seems otherworldly, especially near the Midway, with all the sounds, laughter, bright lights and activity. I wanted my work to represent that.

“I often paint people of color and love that our skin tones are really vibrant and beautiful,” she added in the foundation’s announcement. “In this piece you also see the neon lights of the Midway reflecting off the faces, indicating how bright and lively the fair is at night.”

Although the painting features an image, it is actually a collage, the artist said.

“I wanted the painting to look like a snapshot, but in reality each element is from a separate image. For example, the people are from a photo and each of the rides are separate as well,” Barlow said.

His original painting will be on display at the Fine Arts Center during the State Fair, Aug. 25 through Labor Day, Sept. 5. It has also been reproduced as a commemorative poster and a limited number of signed prints currently available for sale. at mnstatefair.org/commemorative-art. Proceeds support the State Fair Foundation in its mission to preserve and enhance fairgrounds and educational programs.

Barlow holds a BFA from the University of Wisconsin-Stout and an MFA from Minneapolis College of Art and Design.

In 2018, she received the Minnesota Museum of American Art Purchase Award as part of the Minnesota State Fair Fine Art Exhibition.

Barlow has taught at the University of Minnesota, Metropolitan State University, and Carleton College.

She is represented by the Bockley Gallery. For more information, visit lesliebarlowartist.com.

AI needs a babysitter just like the rest of us