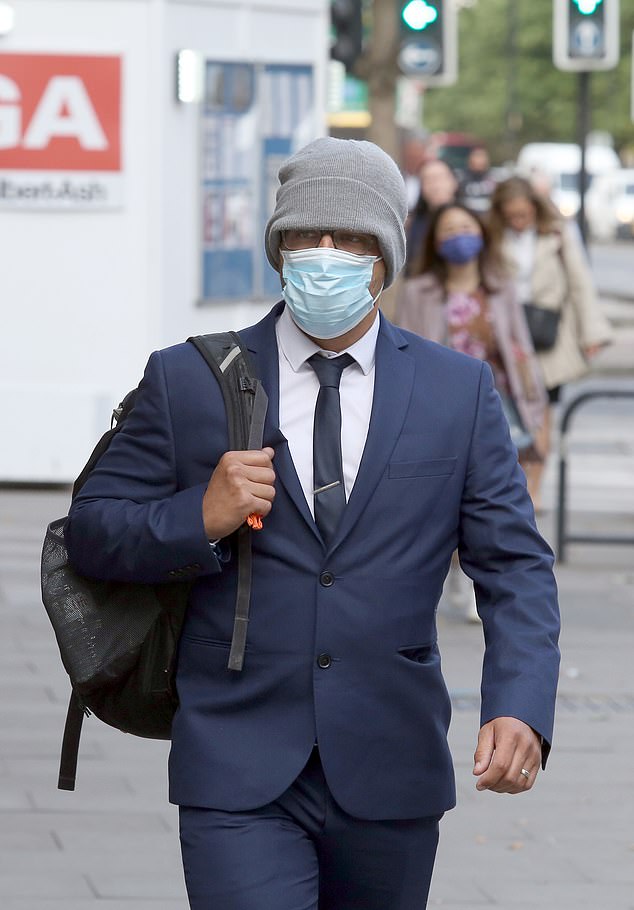 They had made jokes about going on ‘pussy patrol’ and called a section of west London a ‘f****** Somali shithole’ throughout the conversation.

For the kidnapping, rape and murder of 33-year-old Sarah Everard, Couzens, a former parliamentary and diplomatic protection officer, was sentenced last year to life in prison.

The allegedly objectionable content was found by detectives investigating the matter on one of Couzens’ phones in a WhatsApp group.

The defendants were all active police officers at one time, and sometimes they were on duty when the texts were received, according to prosecutor Edward Brown, QC.

Cobban and Borders sent the first communication on June 29, 2019, and it was between them.

Borders responds, “Oh John, then you’re probably f*****,” to another uncharged writer who writes, “Man they ain’t gonna dump you with your skills until you touch a DV [domestic violence] victim.”

That’s good, writes Cobban. DV victims love it. They often become repeat victims because of it, to which Borders responds, “No, they just don’t listen.

The following conversation also takes place between Cobban and Borders on the same day.

Feltham is worse, in response to Borders. When I was there last week, I felt a domino sensation.

A string of emojis depicting a white-faced man surrounded by “brown faces of different shades” appeared after the post.

Neville and Cobban spoke about the restraint of a 15-year-old girl later that year, in August.

“My first shift was as a third wheel, and the rest as an operator, with the first call being for immediate assistance,” adds Neville.

“Pinned” a 15-year-old girl who was acting in the field. I was aware that eventually I would benefit from all my wrestling hugs.

Another conversation between Cobban and Borders is as follows:[Cobban]: She will take care of you.

[Borders]: Sneaky bitch, she will take me as an example, lure me in, then lock me up after I raped and beat her.

The fifth and final charge Cobban faces relates to communications made on August 7, 2019.

Cobban replies, “I bet they all had one thing in common – women who don’t listen”, after Neville says he had “three servants back to back today”.

“This must be understood in context and in combination with the need to maintain public confidence in the police – a compelling requirement in itself, or at the very least, the context in which to assess comments,” Mr Brown said. .

“Right-thinking members of the public would be gravely offended,” the statement read.

“Not just by the comments themselves, but also by the fact that these are serving police officers who discussed, among other serving officers, their colleagues and the citizens they are meant to serve in the terms used in these messages, often enthusiastically and in an encouraging way without dissent.

The three people were initially granted anonymity by the prosecution for “operational reasons”.

But after receiving objections from proponents of open justice, the CPS made the identities available to the general public.

The defendants, along with four other cops, belonged to a WhatsApp group called “Bottle and Stoppers/puppets”, Atkin’s according to Mr Brown.

It should be mentioned that the correspondents occasionally exchanged messages to ask for advice and to discuss work-related matters such as training.

“It follows that these officers were a very tight-knit group.”

Additionally, there is no evidence that any of the defendants (or the other members of the group) “called” or confronted any of their co-defendants after receiving what the prosecution claims were insulting communications.

“The case of the prosecution is that each defendant was an active duty police officer at the time, trained to serve and protect the residents of a diverse city.

“There were no isolated occasions that the co-correspondent felt unable to object in any way,” the author wrote.

Each defendant actively participated and decided to stay with the gang.

The message is threatening and aggressive in nature, we submit, Brown said, referring in particular to Borders’ statement regarding the rape and beating of a co-worker with whom he was to spar.

It’s victim blaming and disrespectful to victims of rape and sexual assault as well as women in general, like the term “sneaky b****”.

Brown then made the following statement in response to Cobban and Neville’s conversation about physically restraining a young girl: having to physically restrain a very vulnerable and upset 15-year-old girl because he had fun, or at least was inspired by his experience of… with a “wrestling hug”, and we submit that

Cobban served as the race and diversity watchdog for the civilian nuclear police on a voluntary basis in 2017, the court heard.

According to Mr. Brown, the position required expertise and understanding.

In order to offer employees with protected characteristics social, moral and professional support, Cobban has registered with an advisory support network on equality.

In February 2019, the three men joined the Metropolitan Police Service.

↯↯↯Read more on the subject on TDPel Media ↯↯↯