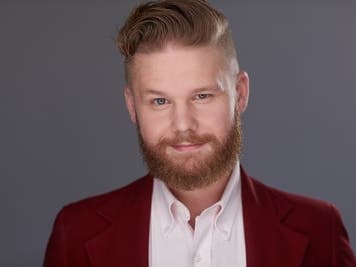 JERSEY CITY, NJ – Razza in Jersey City is known for their delicious pizzas and tasty cocktails, but he has a secret right behind the bar you might not know – bartender TJ Capobianco is a Metropolitan Opera singer.

While Razza’s chef, Dan Richer, nourishes your taste buds, Capobianco can nourish your eardrums with some opera notes, if you ask of course. Most of the time, Capobianco is happy to mix drinks and have a polite chat with his co-workers. It wasn’t until a few weeks ago, when a client recognized Capobianco and asked him to sing some notes, that his colleagues realized.

“If they weren’t aware after the few times I sang, they are now,” Capobianco said with a laugh.

He’s a tenor at the Met Opera, and the power behind his vocals doesn’t need to be showcased. A woman, her daughter and her mother recognized him on Friday as they walked through Razza’s outdoor dining room. They asked him to sing a few lines, and in the first chorus, the block in front of the town hall stopped to listen to Capobianco’s belt. Applause rang out as people craned their necks to see who was singing. Capobianco bowed shyly and thanked the group that had stopped him before going inside.

“No one has ever stopped me like that or asked for my photo,” Capobianco said, “It was really nice to be noticed that way and to know that people always find a way to appreciate the arts.”

Capobianco lives in Jersey City and had a contract with the Met Opera for a season that ended just before January 2020. He was supposed to sign for another season right after, but the coronavirus pandemic has closed theaters across the country , including the Metropolitan Opera. The shutdown hit Capobianco hard, like many other artists.

“It was a big blow,” said Capobianco, “I’m still at the start of my career, so to lose a year like this, a lot of things are under siege at the same time.”

As the son of two chefs, Capobianco said he always felt comfortable in restaurants and immediately kept afloat with jobs in the industry. Last May, he found Razza through a friend and joined the team as a bartender.

“When I walked in I knew the dynamics and the atmosphere would be perfect, it’s perfect,” said Capobianco. “Being an opera singer and working in an Italian restaurant is a pretty happy accident.”

Music and entertainment have been part of his life from an early age. Capobianco spent his high school years in musical theater programs and singing lessons, hoping to one day be on Broadway. Her singing teachers noticed the power behind her voice and suggested opera instead. By the time he was in his sophomore year at Temple University in Philadelphia, Capobianco was making his transition from musical theater to opera singing.

This fall, Capobianco will join the Met Opera for another season, with plans for a continuation until spring 2022. In October, Capobianco will be back on the Path train, heading to Manhattan for rehearsals. Until then, he said he was happy to get patrons to sample opera in Jersey City.

If you ask him for a song, he will probably sing an excerpt from an aria called “Nessun dorma” from Giacomo Puccini’s opera “Turandot”. This is Capobianco’s flagship song. The moving aria follows Calaf’s monologue as he falls in love at first sight with a princess.

As a bartender, Capobianco said the drink he identifies best with aria would be Razza’s Italian lemonade – mint brings the same unexpected sensation as the power of aria, he said. declared.

“It’s a heroic piece and people seem to like the high note at the end,” laughed Capobianco.

You will probably catch him sipping a full-bodied red wine when he’s not behind the bar. He’s a fan of the classics, both in drinks and music, and if you’re lucky he might give you a taste.

Do you have a news item or a story to tell? Email Samantha Mercado at [email protected] Keep up to date with the latest news in Jersey City and subscribe to Jersey City Patch.

Most and least educated cities in California