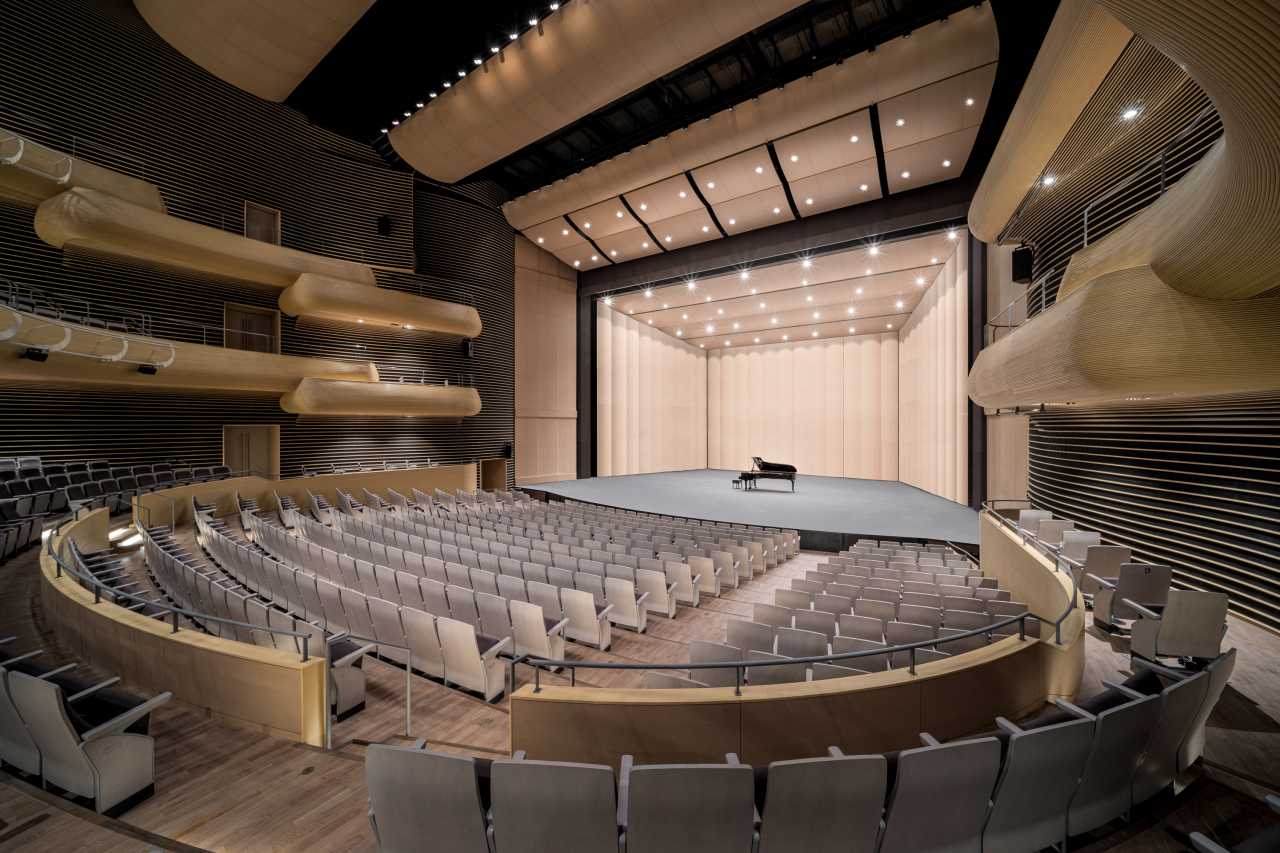 The LG Arts Center Seoul will open its doors on October 13 with a special concert by the London Symphony Orchestra, conducted by Simon Rattle and Korean pianist Cho Seong-jin.

“I wanted to create a one-of-a-kind performance complex, giving visible features to the lobby, atrium and corridor,” Tadao said in a statement from LG Arts Center Seoul.

The versatile 1,335-seat LG Signature Hall is slightly larger than Seoul Arts Center’s main concert hall. “There will be no performance that the LG Arts Center Seoul cannot accommodate due to its size,” general and artistic director Lee Hyun-jung said during a press tour of the venue on Tuesday.

In addition to the main hall, U+ Stage, a black box theater, will offer a variety of stage settings. It can accommodate up to 365 seats and will be used for experimental performances.

The sound system was designed by London-based theater consultancy Theater Projects. The main concert hall has a variable sound absorption system, a reflector and a mobile tower, while the U+ stage is equipped with an immersive sound system with 60 speakers, which can create multi-dimensional sound that completely envelops the listener.

As the new LG Arts Center Seoul is right next to a two-line subway station and close to Gimpo International Airport, the building was constructed to protect it from unwanted noise and vibration. This is the first use of such technology in the country, according to LG Arts Center Seoul.

The former site of the LG Arts Center closed in February after 22 years in Seoul’s wealthy Gangnam-gu’s Yeoksam-dong. The LG Arts Center presented more than 867 works and 6,300 performances. More than 4.5 million people had visited the center since it opened in 2000.

The new center is located in Magok-dong, Gangseo-gu, an area which is part of an urban development project and where the LG Group’s R&D complex LG Science Park is also located. The Magok Arts Center was built as part of LG’s corporate social responsibility initiative and donated to the Seoul Metropolitan Government. After the donation, LG’s non-profit organization, LG Yonam Cultural Foundation, was granted the right to operate the arts complex for the next 20 years.

Packages for the festival will go on sale at 2 p.m. on July 11 via the center’s official website, with regular ticket sales starting July 14.

Classically Trained, Bluegrass-Infused “Garage Band” Time for Three Has a…