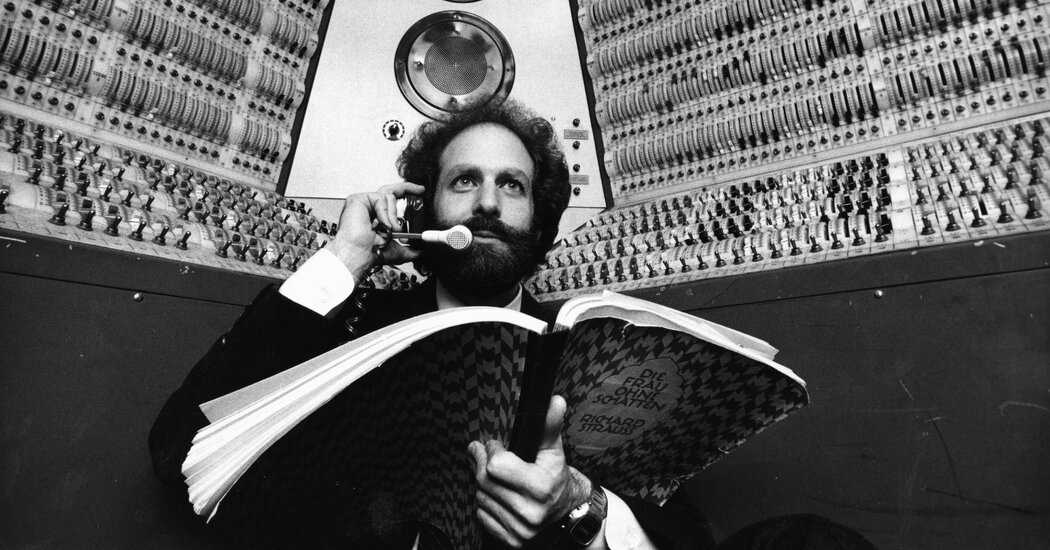 Gil Wechsler, a luminary at the Met Opera, dies at 79

Gil Wechsler, who with innovative lighting designs has helped bring more than 100 productions to life at the Metropolitan Opera, translating the visions of some of opera’s best-known directors while contributing to a more modern look for the settings. on stage at the Met, died July 9 at a memory care facility in Warrington, Pa. He was 79 years old.

Her husband, artist Douglas Sardo, said the cause was complications from dementia.

Mr. Wechsler was the first resident lighting designer at the Met. He lit his inaugural show in 1977 and, over the next 20 years, brought forth the days, the rain fall and the cities burn in 112 Met productions, including 74 new ones.

His career has also taken him to London, Paris and other international opera and ballet centers. Wherever he designed, he knew that audiences often ignored his contributions to a production – which was usually the point.

“If the lighting is good you really shouldn’t notice it often,” he told Opera News in 1987. “In some operas, however, like ‘Die Walküre’, the lighting becomes the spectacle. It should sound natural, it shouldn’t come as a shock, but it should move you.

Fabrizio Melano was among the many directors who appreciated Mr. Wechsler’s skills even though, as he noted, audiences often did not.

“They kind of take lighting for granted, and it’s something intangible,” Melano said in a telephone interview. “You can see sets, you can see people moving, but the lighting is an atmosphere. But sometimes the atmosphere is the most important thing, because a lot depends on it. And he was a master of the atmosphere.

One of the many examples of Mr. Wechsler’s work was seen at the Met in Mr. Melano’s staging of Debussy’s “Pelléas et Mélisande”, on which they collaborated in 1977. The set included a number of canvas and screens, with tree-shaped images projected on them.

“The illusion of moonlight coming through the trees is created by a patterned slide placed in front of one of the lamps,” The New York Times explained in a 1978 article about Mr. Wechsler and how he created his effects. “Seen from the public, the setting looks remarkably like a three-dimensional forest. “

Joseph Volpe, former chief executive of the Met, said Mr. Wechsler was an important part of an effort by John Dexter, Met’s director of productions from 1975 to 1981, to modernize the look of the company’s productions. Previously, lighting was usually handled by the chief electrician, and the approach was simply to light the entire scene. Mr. Wechsler brought nuance and visual effects into play, including using light to make a soloist stand out and the choir to blend into the shadows.

“The company had a nickname for Gil: Prince of Darkness,” Mr. Volpe said in a telephone interview, “because of course Gil understood the importance of not flooding the entire scene with light. “

Gilbert Dale Wechsler was born on February 5, 1942 in Brooklyn. Her father, Arnold, was a stockbroker and her mother, Miriam (Steinberg) Wechsler, was a volunteer at the Brooklyn Museum.

When he was growing up, his parents often sent him to summer camp in New Jersey, Mr Sardo said in a phone interview, and it was while working on camp productions that young Gil found out. for the first time his fascination with the theater.

He graduated from Midwood High School in Brooklyn and studied for three years at Rensselaer Polytechnic Institute in Troy, NY, before realizing that a career in business or finance was not in his future. In 1964 he graduated with a theater degree from New York University, and in 1967 he received a master’s degree in fine arts from Yale.

After graduating he found work as an assistant to famous set and lighting designer Jo Mielziner, and in 1968 he received his first Broadway credit as a lighting designer on the play by Charles Dyer “Staircase”. He will have another credit on Broadway, in 1972, for “There is one in every marriage” by Georges Feydeau. Prior to coming to the Met, he also designed for the Stratford Festival in Ontario, the Harkness Ballet, the Lyric Opera in Chicago, the Guthrie Theater in Minneapolis and other major regional theaters and festivals.

At the Met, Mr. Wechsler worked with Otto Schenk, Jean-Pierre Ponnelle, David Hockney and many other leading directors and designers. Lighting the Met is especially difficult because, unlike Broadway, for example, the shows change every week, if not every day. One of Mr Wechsler’s accomplishments, Mr Sardo said, has been to develop accurate records of lighting patterns for each production, so that one show can be traded more effectively for another.

“Before Gil was involved, there were no reference manuals on how to do this,” Sardo said. “Someone kinda remembered how the lighting was supposed to be.”

In 1979, said Mr. Volpe, Mr. Wechsler made the changes even easier by installing the Met’s first computerized light panel.

His work on a production started long before opening night or even the first rehearsal; for an opera, he studied the score and developed his own ideas about the appearance of each scene.

“Light signals are always a function of the music,” he told The Times, “and in that sense, the score is the bible. The music will suggest a sunrise, or a gloomy day perhaps, as well as a sense of continuity from scene to scene. As I follow the score, certain images automatically come to mind.

But it was not necessarily the same images that came to the mind of the director or the set designer; once they had all thought together, the compromise would begin. In the Opera News interview, he recalled a particular scene from “Turandot” that he and director Franco Zeffirelli conceived in very different ways.

“Puccini’s score does not indicate when the scene is taking place,” he explained, “except to mention that lanterns are placed around the stage. This clue meant “night” to me, but Franco sees it in a different way “- he wanted the scene to be staged in the light of day.

Mr. Wechsler also found compromises with the set and costume designers, as well as with the performers. There was, for example, the issue of fire.

“Fire is difficult, because you obviously can’t have a fire all over the stage, even though many opera houses require it,” he told The Times. “We create fire with smoke, steam and projections. The more smoke and steam we can use, the better. Unfortunately, the more smoke we consume, the less happy the singers are.

The Prince of Darkness didn’t use the shadow just to hide the chorus; in the case of some of the older Met productions, he used it to prevent set wear from being visible. It could be difficult, however.

“When the score calls for a sunny day, we can’t do it too much shiny, or you’ll see where the paint peels off, ”he said. “And we can’t make it so dark that it doesn’t look like day anymore.”

Mr. Wechsler, who lived in Upper Black Eddy, Pa., Oversaw his latest Met production, Verdi’s “La Forza del Destino” in 1996. He and Mr. Sardo, whose relationship began in 1980, were married. in 2017. In addition to Mr. Sardo, Mr. Wechsler is survived by a brother, Norman.

Mr Wechsler’s lighting designs were still in use by the Met for a number of productions before performances were cut short by the Covid-19 pandemic in early 2020.