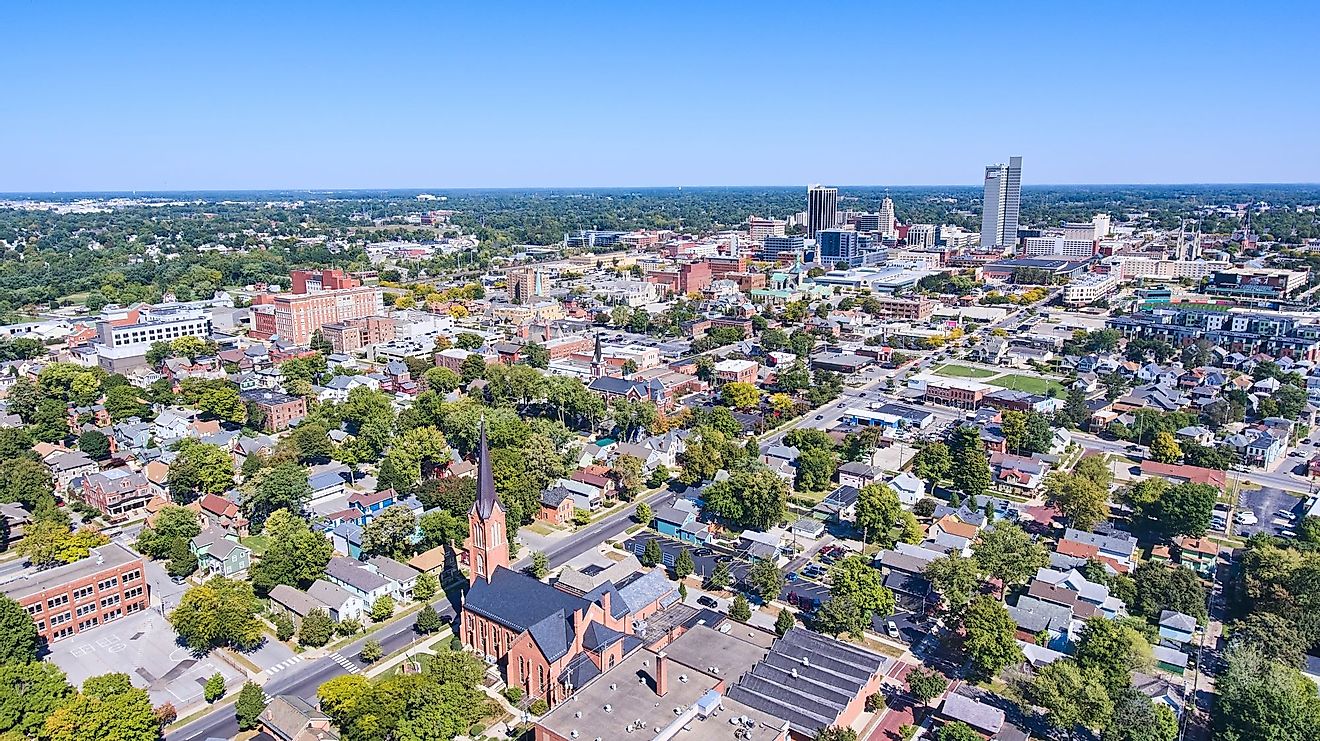 Founded over two centuries ago, Fort Wayne is a large city located in Allen County, in the northeastern part of Indiana, United States. Being the second largest city in the state, Fort Wayne serves as the cultural and commercial center for northeast Indiana and is located approximately 18 miles west of Ohio and 50 miles south of Michigan. Historically, Fort Wayne’s importance to the region is due to its strategic location at the meeting point of two rivers. As a natural transportation center, Fort Wayne played an important role in the development of Indiana.

Fort Wayne covers a total area of ​​287.05 km2, of which 286.50 km2 is land and 0.55 km2 is water. The St. Marys and St. Joseph rivers join to form the Maumee River near downtown Fort Wayne. In the northern and northwestern parts of the city, the terrain becomes hilly. It then climbs until it reaches a point about 40 miles north of the city, where the elevation is 1,060 feet above sea level.

The topography of the city and the region is due to the erosion of the last glaciers of the Ice Age. As the glaciers retreated, they deposited a layer of sediment called a moraine. Below is the St. Lawrence Watershed, which separates the Great Lakes-St. Lawrence River Basin and the Atlantic Ocean watersheds to the south. The area around the town is relatively flat, and the region’s network of rivers makes portaging or transporting goods and canoes relatively easy. The St. Marys River is less than 20 miles from the Little River (formerly known as the Little Wabash River), which through the Wabash River empties into the Ohio and Mississippi Rivers. Indeed, the goods could be easily transported by canoe and boat from Canada to the Gulf of Mexico.

Fort Wayne’s climate is classified as a humid continental climate according to the Köppen climate classification. The weather varies throughout the four seasons, with hot, humid summers and cold winters. Average annual precipitation is 38.34 inches or 974 mm, including frequent summer rain and moderate to heavy snowfall in winter. The proximity of Lake Michigan and Lake Erie affects the weather, and lake effect snow in the form of light showers is common. Winter skies are often cloudy, but there are sunny skies about 75% of the time, with precipitation 132 days a year.

Thunderstorms are common between May and August, with an average of 39 storms per year, including ten days of severe weather. There are one or two winter storms every year. Fall is generally the driest season. Funnel clouds and cold air funnels are relatively common, but full-blown tornadoes are not. The average daily high in July is 74°F, with about 14 days of heat above 90°F between June and August. The average temperature in January is just under 23°F, with average daytime highs of just over 30°F.

Archaeological evidence shows that Paleo-Indians lived in the area for thousands of years. They hunted and ate the abundant shells and mussels in freshwater lakes and streams. They also left numerous burial mounds throughout the region. In the 1500s, the land had been claimed by the French via Jacques Cartier, who had reached the St. Lawrence River. Indiana became part of New France and played an important role in the French fur trade. In the 1600s, the area was home to both Iroquois and Algonquin nations. The majority were from the Miami Tribe, an Algonquin-speaking group. The Iroquois were supported by English settlers, while the French supported the Miami and other Algonquin peoples.

Fort Miami was established in the area that is now Fort Wayne in 1697 by the French. It was on an established portage route from the Maumee to the Wabash River. War broke out between the French and the English, culminating in the Treaty of Paris in 1763, in which the French ceded land east of the Mississippi River, including what is now Indiana. Fort Wayne was built by the United States Army in 1794 and is named after Revolutionary War General Anthony Wayne. Allen County was established in 1824. Numerous conflicts over the years resulted in the forced eviction of the native peoples from the area, which took them into the western territories and essentially eliminated their presence in Indiana.

A flood in 1913 left 15,000 residents homeless and killed seven. In the 1980s, industrialization declined across the region, with many job losses, and urban blight became a problem. In 1982, a flood damaged 2,000 buildings and caused the evacuation of 9,000 inhabitants. After the decline of the 1980s, the city experienced a period of revival in the 1990s, which included the redevelopment of its downtown area. Crime levels have declined and the economy has rebounded through diversification. A $50 million flood control project resulted in the creation of Headwaters Park, a significant public green space.

The people of Fort Wayne

The French census of their Fort Miami included 40 Europeans and about 1,000 Miamis. In 1829, when incorporated into a town, the population was only 300. By 1840, it had grown to 2,000. After a large influx of Irish and German immigrants in the late 18th century, Fort Wayne’s population grew to around 50,000. After steady growth in the early 20th century, the city’s population declined between 1970 and 1980 along with manufacturing jobs, but rebounded in the 1990s. There was a 23.3% growth between the censuses of 2000 and 2010. According to the last US census, the population of Fort Wayne is 263,886. The Fort Wayne metropolitan area includes Allen, Wells, and Whitley counties, with Fort Wayne being its major city and having a combined population of 419,453, according to 2011 estimates.

At first, Fort Wayne consisted of housing for soldiers, gradually coming to include businesses and other housing for merchants passing through the area. By the 1830s Fort Wayne became known as Summit City or the highest point along the Wabash and Erie Canal route. When the railroad was built later in the 19th century, Fort Wayne became a key point on the Pennsylvania Railroad. The industry flourished and many immigrants were attracted to the city because of the job prospects.

During its heyday as a manufacturing center, several innovations were developed in Fort Wayne, including gas pumps in 1885, refrigerators in 1913, and home video game consoles in 1972. Like many other municipalities in what is becoming known as the Rust Belt, Fort Wayne’s fortunes grew with a booming manufacturing sector. Subsequently, they plunged when traditional industries began to falter in the 20th century. Modern Fort Wayne has reconfigured its economy around distribution, logistics, healthcare, and other service industries. About 1-2% of the population is employed in the defense industry.

Fort Wayne’s rich history can be explored in a variety of ways. Located in Old City Hall, the History Center includes a collection of over 23,000 artifacts and exhibits. The Allen County–Fort Wayne Historical Society operates the Richardville House, built in 1827, and one of two National Historic Landmarks in the city. The Fred J. Reynolds Historical Genealogy Department at the Allen County Public Library is the second largest genealogy collection in North America. It includes 350,000 printed volumes and 513,000 articles on microfilm and microfiche.