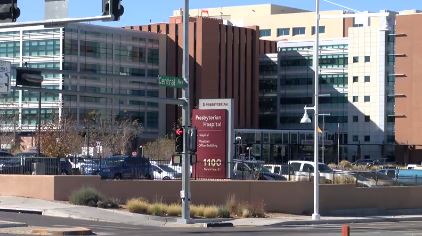 ALBUQUERQUE, NM (KRQE) – It keeps happening; someone’s catalytic converter was stolen. This time, the victims were parents in the emergency room caring for their very sick daughter.

Matthew Medina said his wife’s catalytic converter was stolen from his car while they were at the downtown Presbyterian Hospital seeking help for their daughter with RSV.

“We were in the ER for about 28 hours before being admitted,” Medina said.

At some point, his wife decided to go home to freshen up. As soon as she started her car, there was a loud noise. Right away, she knew something was wrong.

“I got out to see what was going on and realized I had to check around the vehicle and realized underneath that the catalytic converter had been taken,” Medina said.

Medina filed a report with the hospital security department and was shocked to learn that this was not the first time something like this had happened at the hospital.

“Security let me know that this is a recurring issue that occurs on the Presbyterian Hospital campus,” Medina said.

Medina said he was also told people’s gas tanks were siphoned off and cars were stolen from the parking lot.

KRQE contacted Presbyterian Hospital and they sent us the following statement:

Creating a safe and secure environment for our patients, visitors and staff is a top priority. We continue to improve security measures on campus at our Presbyterian Hospital, which include cameras, emergency call boxes, out-of-hours escorts, and regular patrols by security guards and of law enforcement. Unfortunately, despite these efforts, sometimes thefts occur in parking lots. We work closely with law enforcement to resolve reported incidents and continually look for other ways to ensure a safe campus for everyone.

The city has entered theft reports on the Scrap Alert website to notify scrap recyclers when they know one is stolen, but thieves still manage to get money for the small amount of precious metal inside.