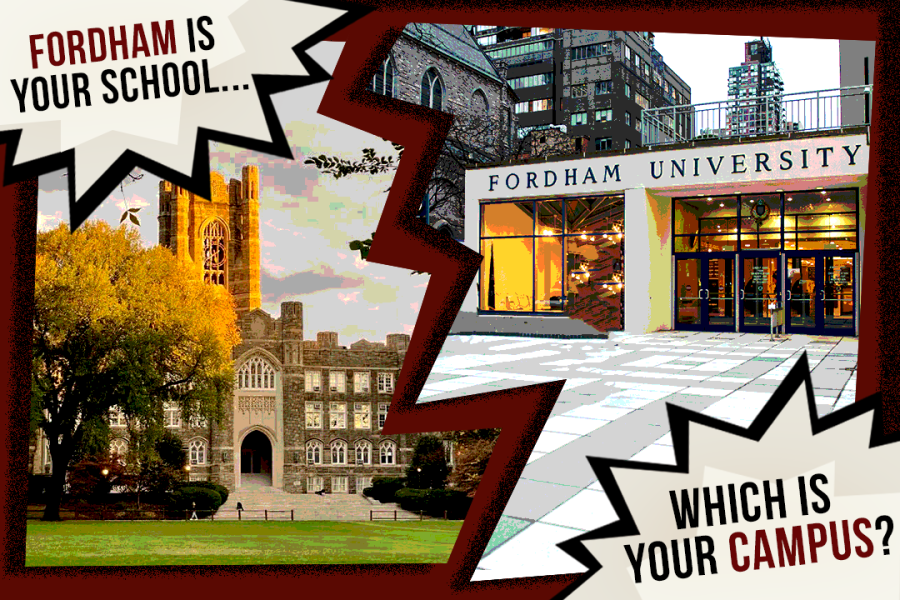 Fordham University is made up of three campuses in New York State, two of which serve the undergraduate population: the Rose Hill campus located in the Bronx and the Lincoln Center campus located in Manhattan. When applying, prospective Fordham students must choose which campus to apply to before submitting their application.

After beginning enrollment, some students find they are better suited to another campus because of their major interest in student organizations or simply because their preferred college experience does not match their home campus. If a student thinks they would do better on a different campus than the one they initially chose, then they have the option of requesting an internal transfer.

A comparison of campuses

The most notable difference between the university’s two undergraduate campuses is their size and setting, with Pink Hill being an 85-acre, Gothic-style and more traditional campus, and Lincoln Center serving as a two-block vertical campus located in the Upper West Side neighborhood of New York City.

Rose Hill, who founded the university in 1841is also home to all of the university’s sports teams and has several sports facilities and other sports facilities on campus. The campus has Rose Hill Gymnasium, home to the basketball and volleyball teams; Jack Coffey Field, home to the football and soccer teams; and the Colonel Francis B. Messmore Aquatic Centerwhere, among other things, the swimming and diving teams train.

Some students may find themselves restricted to one campus depending on their field of study, which also varies from campus to campus.

Both campuses offer many opportunities for campus involvement. In addition to athletics, there are a wide variety of student organizations that focus on academic interests, personal interests, and cultures.

Some students may find themselves restricted to one campus depending on their field of study, which also varies from campus to campus. The dance and theater majors, for example, are exclusive to Lincoln Center, while resources for the biological sciences and chemistry majors are exclusive to Rose Hill. Rebecca Stark-Gendrano, assistant dean for juniors and transfers at Lincoln Center, noted that the majors and interests of students at the two campuses differ.

“Both the BFA Dance program and the Theater program are based on the Lincoln Center campus, which means LC has become the center of Fordham’s arts community,” Stark-Gendrano said. “As a result, the LC campus tends to attract a very creative group of students. The Rose Hill campus has room for all sports fields, so our student-athletes are almost always based at the HR campus.

The Fordham Lincoln Center is located at W. 60th Street and Columbus Avenue, near the Metropolitan Opera, Lincoln Center Plaza and the Juilliard School. Lincoln Center started as the Liberal Arts College in 1968. The first on-site classes were taught by Fordham Law, which is still part of the Lincoln Center campus.

The artistic environment in and around Lincoln Center makes the campus ideal for students studying the arts or who simply like to spend their time at the theater, ballet, or at a nearby museum. What Lincoln Center lacks on campus, it makes up for in the neighborhood around it. Central Park is one block from campus with Broadway shows and Madison Square Garden being a short train ride away.

Additionally, some students prefer to live in the city rather than live on a traditional campus, whether it’s day-to-day life or the fact that Lincoln Center is often closer to internship opportunities.

If a student wishes to change campus, he must go through the internal transfer process. This process involves meeting with a class dean, completing a transfer request, and waiting for their approval. If a student wishes to transfer to the Gabelli School of Business, they must also attend an additional information session organized by Dean Steven Najdzionek. Depending on the college, internal transfer may be more difficult. For example, if a student is trying to transfer to Gabelli School of Business at Lincoln Center, there may be less chance of success since the program is smaller and more selective.

Flores said she found her career goals aligned more with GSBRH and was motivated to transfer due to differences in student life between campuses.

Catie Flores, Gabelli School of Business at Rose Hill (GSBRH) ’25, transferred from Lincoln Center to Rose Hill after her first semester. Flores said she found her career goals aligned more with GSBRH and was motivated to transfer due to differences in student life between campuses.

“(Lincoln Center) felt a bit like high school. I felt like the people here (at Rose Hill) were friendlier,” she said. “There was kind of a lack of community unless you were super, super involved, which I could have done more to be more involved. I just felt like I didn’t have many friends.

Flores also found it easier to join student organizations at Rose Hill that matched her interests, such as the First-Year Diversity Scholars Program and Fordham University Emerging Leaders.

“There’s so much to do (at Lincoln Center), whereas at Rose Hill it was kind of stuffy, in a way,” she said. “I think there are just a lot more creative people here. That’s not to say there aren’t any in Rose Hill, but there is more creative space.

Both Flores and Schumacher said they were happy with their transfer decision.

“Sometimes all you need is a change of scenery and a different pace,” Stark-Gendrano said.