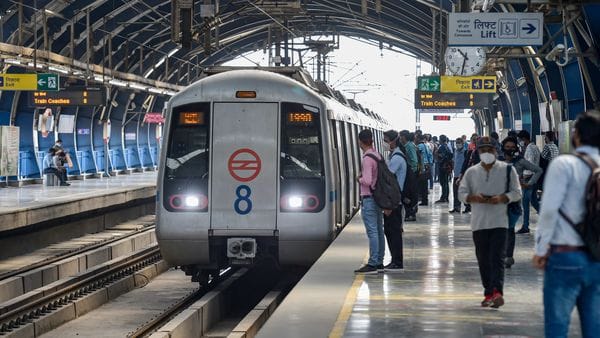 Delhi Metro launched a FASTag / UPI-based cashless parking lot at Kashmere Gate metro station in Delhi on Tuesday. In a statement, the DMRC said: “For the first time in the country, a cashless parking lot based on FASTag / UPI has been launched at Kashmere Gate subway station by Dr Mangu Singh, MD, DMRC.” Senior officials from the DMRC and the National Payments Corporation of India (NPCI) were also present at the launch.

As part of the Multi-Model Integration Initiative (MMI), dedicated intermediate public transport (IPT) lanes for cars, taxis and electric rickshaws were also inaugurated at the station, according to the press release. .

This exclusively cashless parking lot located at Gate 6 of Kashmere Gate Station can accommodate 55 four-wheeled and 174 two-wheeled vehicles. Entry / exit and payment for 4 wheels can also be done via FASTag.

The parking fee will be deducted via FASTag, which will reduce the time of entry and payment. Only vehicles with FASTag will be allowed to park in this facility.

Entry for 2-wheelers can only be done by passing the DMRC smart card. The smart card pass is only used to record the entry / exit time and fare calculation and no money will be deducted from the card. Parking fees can be paid by UPI apps by scanning the QR code.

In the future, payment may also be made via DMRC / NCMC cards. The installation is a pilot project of the DMRC. In addition, DMRC plans to implement similar systems in several of its car parks across Delhi-NCR.

In the second phase of MMI, which is under construction, there will be a food court (which will be established by DTIDC) and also a bus terminal (3 lanes with a capacity of 5 buses each) which will be built by DMRC .

“After the completion of the second phase, Kashmere Gate will be a transportation hub, integrating metro connectivity on lines -1, -2 and -6 with parking, ISBT Kashmere Gate, city bus service and Taxi / Auto / e-Rikshaw services, â€said the DMRC.

Kashmere Gate Station is DMRC’s only triple interchange station and is one of the busiest stations on the network.

Delhi Metro General Manager Dr Mangu Singh said the cashless parking project is a major milestone under the government’s â€œDigital Indiaâ€ initiative. The Delhi metro has made this a pilot project. After observing the response, he said, the DMRC will plan similar systems in more parking lots at train stations.

â€œIn fact, we will explore more opportunities to go digital wherever there is reach. This will not only help us modernize facilities, but will also help commuters by saving them time and making the process easier. MMI, we have many other projects, which will be implemented gradually, â€he said.

* Thank you for subscribing to our newsletter.

Remote working from Capitol Hill is always an option