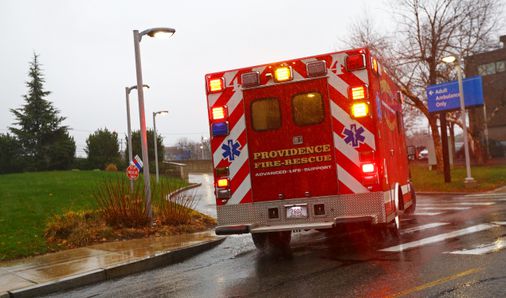 There is a lot of noise now. The members who were replaced included those who had advocated for more oversight and training of the EMS service in the state. They represented local medical organizations, and although the McKee administration has said it did not have to consult with those organizations, that was standard practice in the past. That didn’t happen this time.

One of the new replacements, meanwhile, does not appear to have the correct credentials under the law, which states that one of 25 appointees is supposed to sit on the committee of an organization of professional trauma surgeons. Dr. Joseph Espat does not sit on that committee, according to the Rhode Island Medical Society, and is actually a cancer surgeon.

Some fear this could jeopardize Rhode Island Hospital’s designation as the state’s only Level 1 trauma center. That would mean some of the most serious cases would have to come out of Rhode Island. It’s a speculative and distant risk, experts say, but potentially serious.

“Lifespan shares the concerns communicated by several member organizations regarding the lack of adequate representation on the Ambulance Services Advisory Board,” spokeswoman Kathleen Hart said. “We are working closely with the governor’s office and hope the situation will be rectified quickly.”

The McKee administration official who made the decisions, Craig Dwyer, said he followed the law, not politics, in making his decisions.

“Everything was done with good intentions, in accordance with the rules and regulations that I follow in the normal course of business,” said Dwyer, director of boards and appointments in Governor Dan McKee’s office.

Dwyer said he was reviewing the discrepancy over the trauma surgeon, though an update was not immediately available Friday.

The advice, obscure as it is, is important because it helps establish policies and train people who arrive when you call 911 or when you are in a car accident. Rhode Island has a fire-based EMS system, which means ambulance crews generally work within the fire departments.

Disputes in recent years are complex and, like any good Rhode Island dispute, sometimes personal. They have included struggles over the power, role and compensation of local EMS team medical directors and over the formation of EMS teams. Many physicians want a broader role that follows emerging national trends. But they have faced local resistance from mayors or unions who have raised concerns about costs and whether a doctor has power over things like discipline.

“It’s crucial to prehospital care that this advice works as correctly and as smoothly as possible,” DeToy said. “And he hasn’t had that story for the last three, four or five years.”

Definitely not, and in the last few weeks it’s only gotten worse. Espat’s nomination is just one of several that involved local healthcare professionals. They also included the removal of a member of the State Emergency Nurses Association, who was replaced by the president of the United Nurses and Allied Professionals union, and the replacement of Dr. Joe Lauro, an emergency physician who has been at the forefront of these disputes. . (Critics weren’t worried about the person who replaced Lauro, who is qualified under the law as a member of the Rhode Island chapter of the American College of Emergency Physicians.)

“At the end of the day, what worries me is that in the future, when you call 911 to come to your home because of a medical emergency, that person who comes to your door will have less medical oversight and training will be less,” said Dr. Otis Warren, past president of the Rhode Island Chapter of the American College of Emergency Physicians. “I’m concerned that this council will reduce training requirements, and I concerned that it will reduce oversight or the ability of medical directors to provide oversight of EMS.”

On the other side of this dispute are firefighter unions and local leaders, including one mayor in particular, Joseph Polisena of Johnston. Polisena also sits on the Ambulance Board. On Tuesday, moments after saying he knew nothing about the changes to the board, Polisena defended a key justification for the changes: a move away from Lifespan affiliate members.

“Lifetime is not happy because they can’t control everything,” Polisena said.

Lifespan has no representatives on the Board of Directors, but several people who were replaced were affiliated with Lifespan.

Polisena himself was modest about his role, saying he didn’t ask McKee anything: “I’m just a stupid mayor, that’s all. I’m just a mayor who’s a nurse.

The board then meets in early March. Members will not include John Pliakas, who has been replaced by Lynn Blais, the president of the UNAP union. Both are registered nurses.

“It is concerning because the agenda of the dominant majority may not always be in the best interest of patient care, or of moving Rhode Island EMS forward in accordance with national standards,” said Pliakas, who is the chief of emergency medical services in Cumberland.

Her replacement, Blais, said Polisena initially contacted her in late November to apply for a place on the board. After that, she joined the Association of Emergency Nurses, which made her legally qualified to serve on the board.

Like Pliakas, she does not work in an emergency department. Blais is a nurse in the Post-Anesthesia Unit at CharterCare’s Fatima Hospital. Her main role, however, is that of President of UNAP.

“If they think I’m a rubber stamper, I’ll tell you I’m not a rubber stamper. The positions I take will be based on careful consideration of all the facts,” Blais said. “I’m not a Lifespan rubber stamp, which worries a lot of people.”

Charlene Draleau, president of the Rhode Island Emergency Nurses Association, said she was not consulted on the change. This means there has been no sort of transition between Pliakas, who has been there for years and who Draleau says has been trying to change things for the better, and the new appointee.

“If you want to do it legitimately, if you’re tired of John Pliakas and you need me to replace him, let’s do it, but in my agency, I’m going to make sure that John Pliakas and his replacement have a conversation. on what is happening and what our goals are,” Draleau said.

Joseph Andriole, president of the Rhode Island Association of Fire Fighters, said his union had nothing to do with recent board changes. (His organization gets three picks, but none were in place this time around.)

“I think that’s a cynical way of looking at it, and I don’t think that’s the truth behind it,” Andriole said. “I think maybe the heads of government wanted a different direction.”

What is certain is that the direction the doctors and their allies wanted was often, but not always, at odds with what Andriole’s organization wanted. This included the powers of medical directors. Doctors said they wanted better supervision and better training; Andriole described it as a power grab.

“We felt that everyone should be respected in their own area of ​​expertise,” Andriole said. “Although they are experts in the medical field, that is only part of what we do when we manage a scene in difficult conditions which are different from the conditions inside the hospital.

Dwyer, meanwhile — the man who made those decisions — said he acted in good faith. The board was made up of four members from a single hospital group, he said, so he wanted to achieve some balance. He also had gender balance in mind.

But he has not heard from Polisena or the firefighters’ union about it, he said.

“I got out of politics,” said Dwyer, a former Cumberland elected official. “I am not a politician. I try to put the right people in the right place. I’m a hero sometimes, and I’m a heel sometimes.