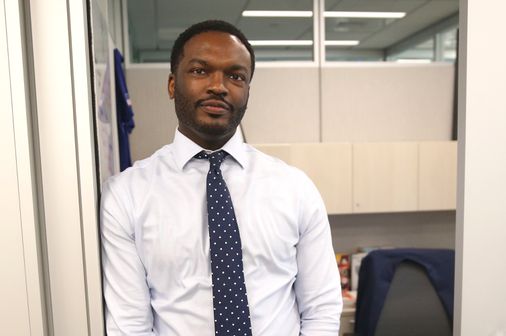 Kevin Simon: I am originally from Brooklyn, NY My parents are Haitian. My father, Deacon Mauclair Simon, was the first black deacon in the Roman Catholic Archdiocese of New York.

Very early on, I saw my father counseling people dealing with a wide range of challenges, whether it was immigration, whether it was spiritual in nature or mental health. And he has a certain disposition that’s just calm. Besides being a deacon, he was a public school teacher for 25 years in New York City and then after that he became a social worker.

And that’s how I learned that the vast majority of psychiatric illnesses – schizophrenia, depression, bipolar, substance use disorders – actually start in early or mid-adolescence. If you want to be as preventative as possible, you have to start seeing children. And then when you see children, you see that there’s a strong comorbidity between mental health, substance use, and involvement in juvenile justice.

So I did a child psychiatry fellowship at Boston Children’s Hospital.

The work my dad did helping people in their lowest state, I find that’s what I do as a child psychiatrist and addiction specialist.

The most vulnerable people in society — that’s where I wanted to be.

Q: Why do children have so much difficulty today?

A: There is evidence that the rise in anxiety, the rise in depression, the increase in emergency room visits, were increasing before 2020.

Then if we think of a young person who had neurodevelopmental disabilities, who at one point had maybe 10 hours of structured, organized behavioral engagement – ​​you took it away. And not away for a day, but for months at a time.

If we think of other subsets of young people — Latino, Black youth, minority youth — who is most impacted by COVID? As of June 2021, more than 140,000 young people nationwide have lost a caregiver to COVID. Now you compose that with – we don’t really know when that’s going to end.

All of this has only exacerbated pre-pandemic problems.

Q: What are the main problems you will try to solve?

I hear from the supplier side, “Hey, it’s hard to retain suppliers.” I hear from parents and patients: “I can’t send my son to a clinic. “I can’t help my daughter – it’s a waiting list of more than eight months.”

Access is a problem. At the same time, stigma is a problem. There are subsets of populations that will not engage with a mental health clinician. I can talk about my ethnic culture of being a Haitian American. There is a hesitation on: “Who is a mental health provider? Why would I want to talk to any of them?

So part of my role is also to communicate about how therapy is healthy and normal. And show that yes, someone who looks like you, thinks like you, has done this kind of work.

Also, workforce development. We basically have two systems – the virtual compensation system [providers who don’t accept insurance] and the MassHealth system, Medicaid. Unfortunately, a fair number of behavioral health providers exist in the alternative system, because fee-for-service is not there.

Q: How can the city facilitate access to mental health care?

A: There is already a model where a clinician or child psychiatrist serves as a consultant to primary care providers – the Massachusetts Child Psychiatry Access Program or McPAP.

Potentially, the McPAP model could be piloted in community health centers and schools. It’s a way to expand access.

The city can also advocate for different reimbursement fees and simplify the billing process a bit so providers can see more patients.

Also, in trying to address mental and behavioral health issues, the mayor and Dr. Ojikutu had thought about developing a behavioral health and wellness center, where we could have people under one roof to try to better meet the challenges we see.

There is an Office of Recovery Services that focuses on substance use. There are services for the homeless; a large subset of homeless people have mental illness. There is the Child and Family Office. How do you take a step back and say, “Oh wait a minute, there are indeed connections here and we could work together”?

There is a subset of young people who have experienced an increase in homelessness during the pandemic period. These young people are going to school, aren’t they? You begin to see that we are actually all connected — housing, food insecurity, economic security, education, living environment. We need to think holistically.

Q: What do you think will be different in Boston because of your role?

A: I hope we can think about prevention, to create safe spaces where young people can gather, like the Zumix in East Boston – where young people aged 8 to 18 learn to host a podcast, play a musical instrument and feel comfortable making mistakes. It doesn’t identify itself as a therapy place, but I would say it’s a very therapeutic place. There aren’t enough of these places around. We could promote that kind of environment.

Mental and behavioral health challenges are clearly more than one person, a mayor, a mayor’s office, or the Boston Public Health Commission, can solve. It’s really everyone on deck.

We are all connected to someone who has a behavioral health issue. There’s no way to say it’s not important to you.

If you or a family member is dealing with a mental health or addiction crisis, the Massachusetts Emergency Services Program/Mobile Crisis Response is available 24 hours a day, 7 days a week, 365 days per year. Call toll free at 1 (877) 382-1609.

Massachusetts also now has a three-digit hotline for call takers trained by the National Suicide Prevention Lifeline. If you or a loved one are in emotional distress or have suicidal thoughts, call 988 anytime from anywhere.

More resources are available at website from the Massachusetts Department of Mental Health. https://www.mass.gov/guides/finding-mental-health-support-in-massachusetts

Fictiv Strengthens Its Global Presence and Tech Talent with the Opening of a New Office in Pune, India