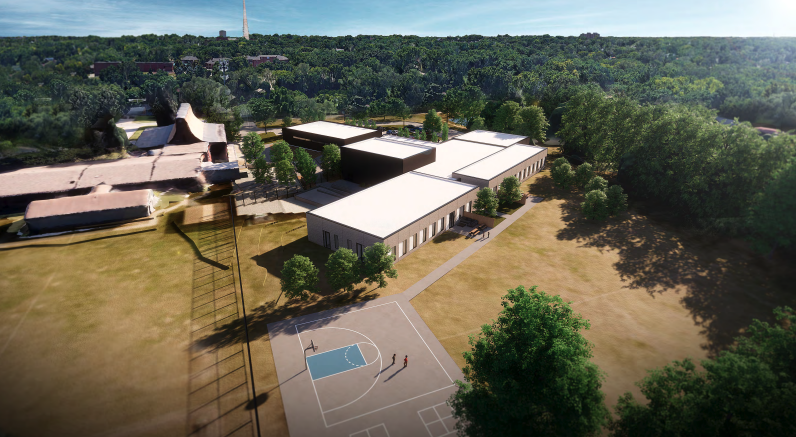 OMAHA — A rising $25 million residential youth treatment center in North Omaha aims to fill a service gap in the metro area, one where courts and families have sent troubled teens to other states for assistance.

The new nonprofit Radius will include a 24-room facility for residents ages 12 to 18, as well as behavioral, recreational and educational programs and a stand-alone health clinic open to families and the community.

Set to open next summer on 50th and Grand Avenue, the alternative to more restrictive juvenile detention is designed to strengthen the whole family.

While a private campaign by philanthropists paid for the construction, Radius must operate with the help of government funding through referrals from the juvenile probation system and state courts.

Radius CEO Nick Juliano said combining a residential program with clinical support that can involve entire families will help Douglas County care for its own young people and improve the chances of long-term success at as they grow in their community.

“Where we will be unique is that we will start this family work on the day of admission and someone will work with the family throughout the young person’s stay,” said Juliano, former regional advocacy director and of Boys Town’s public policies.

Currently, he said, young people who break the law but are deemed best served outside of traditional prison are too often placed in residential treatment outside of their home county or even Nebraska. He said that while there are local facilities to meet the needs, these are often full. He said Radius supporters want to avoid keeping a youngster in jail until a residential treatment center opens.

Radius intends to fill the gaps, he said, allowing young people in the region to benefit from intensive treatment closer to family members who, ideally, are part of the antidote that propels the young people on a more productive path.

Juliano said the typical Radius resident can suffer from a combination of extreme behaviors beyond violations of the law. Their needs may require a less intense setting than a psychiatric hospital but more than a traditional group home.

“They may have concurrent mental health and addiction treatment needs. Our program is designed to deal with all of these issues as well as to have services that can continue after they leave our programs.

We have a continuum of services. … Even with that, we had this group of young people who weren’t getting what they needed here in Omaha.

Chris Rodgers, a Douglas County commissioner heavily involved in juvenile justice reform, said the county praises Radius. He called it one of the “basic tools” that could help achieve the goal of keeping people in the new downtown Omaha juvenile justice center only for those who need to be jailed.

This county detention center, set to open in 2023, has fewer beds than the current youth center, and Rodgers said the vision is still to have additional community resources to reduce reliance on jail for non-violent youth.

The plan for the Radius campus, which includes nearly 30,000 square feet of new space, sparked concern and opposition from area residents when it was presented to city council. Safety features were added before council approved the project.

A neighbor of Radius is Metro Area Youth Services (MAYS) – which is a separate non-profit organization that recently moved to the former St. Paul Lutheran Church and School. Together, the youth-focused entities occupy approximately 10 acres.

Radius, formerly known as the Nebraska Youth Justice Initiative, emerged from an advisory committee convened in 2019 to examine the lack of residential services for youth with trauma, mental health and addictions.

The name “Radius” tells a story

The advisory board included government, mental health and other professionals, as well as a parent and a young person who at some point had to leave the state to access the type of services Radius will provide.

By then, much attention and time had already been devoted by the state and county government to exploring justice reform.

“We have a continuum of services for these young people. It’s a very good continuity. Even with that, we had this group of youngsters who weren’t getting what they needed here in Omaha,” Juliano said. “We are now filling this gap, in a very intentional and purposeful way, so as not to duplicate others.”

The name Radius was designed to tell its story: “Trauma-informed care begins at the center, where the causes of personal struggles are identified, then radiates out to healing and redemption.”

The youngsters will likely live there for nine months to a year, Juliano said, taking classes and earning credits through a program approved by the Nebraska Department of Education. They will receive therapy and recreational programs.

“It’s a ripple effect that will benefit our youth, our families, our neighborhood and our community,” he said.

Juliano pointed out that young people and families who are not involved in the juvenile justice system can also get help at the Charles Drew Health Clinic. He said the clinic’s services are also aimed at preventing problems and court intervention.

Radius is supported by philanthropic foundations. Board members include key representatives from the University of Nebraska Medical Center Department of Psychiatry, Charles Drew Centers, Sherwood Foundation, National Security Bank and the legal profession.

Long-term success, Juliano said, is getting rehabilitated young people home and keeping them and their families connected with a healthcare provider.

“So they can be there safely without any more breaches of the law. They can graduate from high school and eventually find employment in our community.

An elegant $625,000 Colonial has hit the Long Valley market